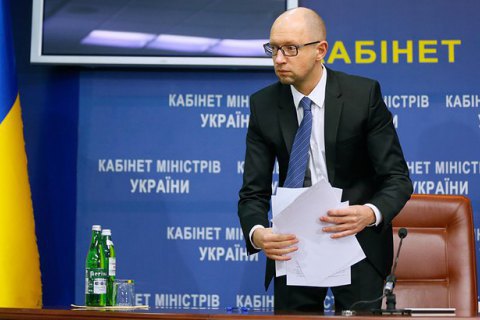 Outgoing Prime Minister Arseniy Yatsenyuk may have to keep on until a snap election and a new round of coalition talks, Gorshenin Institute president Vadym Omelchenko has commented on the situation with a coalition agreement.

"Just think about it: to form a new coalition, the personal applications of 226 MPs to join a coalition have to be registered. Then the previously reached agreements should be put to vote, among them:

- the parliament resolution cancelling the resolution on no confidence in Yatsenyuk's government;

- the resolution on the acceptance of Yatsenyuk's resignation;

changes to the law on prosecution to make Yuriy Lutsenko eligible for the prosecutor-general's post;

- vote to appoint Lutsenko as prosecutor-general'

"The only way to collect the votes for all of the above is to put them to vote in a package - this will safeguard, the vote at least to some extent, from dishonest behaviour of partners during a consecutive vote," Omelchenko stressed. "If you put them to vote one by one, this leaves little chance as it is more difficult and expensive to find 226 votes for each decision."

"Even a simple recount of the above-mentioned factors prompts a simple conclusion: in the current situation it may turn out that the incumbent prime minister may have to keep on until a snap election and a new round of coalition talks. And you should also expand the mentioned list of conditions to include preserving Interior Minister Arsen Avakov's post, which scares a great part of the PPB [Petro Poroshenko Bloc], changing the management of state-owned companies and keeping preferences for oligarchs," he said.

"It will stay the same for as long as the political process, as it is understood by Ukrainian elites, will remain the process of fighting for control of the corruption vertical. We are not witnessing the key, mental "reform in heads" yet," he said.

Yatsenyuk announced his plans to step down on 10 April.