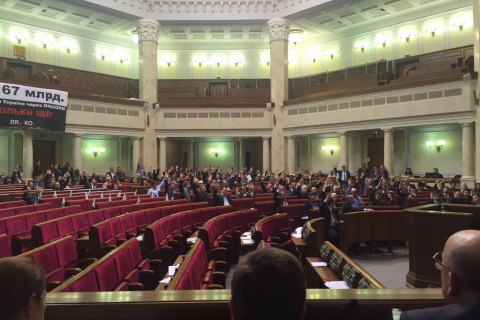 The factions of the Petro Poroshenko Bloc (PPB) and the People's Front at their joint meeting have agreed the composition of a new Cabinet of Ministers, the spokesman for the parliament speaker, Dmytro Stolyarchuk, has tweeted.

The deputy prime ministers will be:

The government will include the following ministers:

1. Culture Ministry - Yevhen Nishchuk, who was a minister in Arseniy Yatsenyuk's first Cabinet of Ministers,

2. Finance Ministry - Oleksandr Danylyuk, a deputy head of the presidential administration and the president's representative in the Cabinet of Ministers,

5. Education and Science Ministry - Liliya Hrynevych, an MP from the People's Front faction and the chairman of the parliamentary committee for science and education,

8. Regional Development, Construction and Utilities Ministry - Hennadiy Zubko, the current head of the ministry and a deputy prime minister,

9. Minister of the Cabinet of Ministers - Oleksandr Sayenko, the head of the parliament speaker's apparatus,