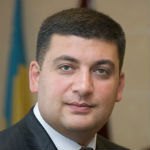 Born in Vinnytsya on 20 January 1978 to a white-collar family (his mother is a teacher).

Finished Vinnytsya secondary school No 35 in 1994.

Studied Law in the Interregional Academy of Personnel Management in 2000-2003.

In February 2010, he graduated from the National Academy of Public Administration under the president of Ukraine with the Master’s Degree in Public Development Management, majoring in Regional and Local Management.

Got his first job as a metal worker at the Shkolnyk private enterprise when he was 14 years old.

According to his official biography, he held senior posts in commercial companies in 1994-2005.

According to the Power of Money magazine, in the 1990s, Hroysman together with his friends imported foodstuffs and detergents from Europe, which they later sold in local markets and shops. In a while he founded the Podillya farming company which produced crops, meat and dairy. It was then, as Hroysman says, that he learnt how to navigate a company out of the crisis.

The Intertrade real estate company is also listed among his projects.

In 2002, he was elected a Vinnytsya city councilor and was as a deputy head of the permanent commission of the city council for human rights, law, councillors' performance and ethics.

In 2005, was a member of the Our Ukraine People’s Union party.

On 26 March 2006, Hroysman was elected Vinnytsya city head. On 31 October 2010, he was re-elected as mayor with the record support of 77.8 per cent of votes. He was running on behalf of the Conscience of Ukraine party.

After the Euro-Maydan protests, on 27 January 2014, he was appointed as deputy prime minister and minister of regional development, construction, housing and utilities. According to Hroysman, he was offered the post by Arseniy Yatsenyuk. During the Crimea crisis, Volodymyr Hroysman called on Crimean residents not to vote in the illegal referendum on 16 March 2015. He unambiguously described the Crimean events as Russia's military aggression and encroachment on the territorial integrity of Ukraine.

In July 2014, Volodymyr Hroysman chaired the government commission investigating the crash of the Malaysian Airlines MH17 Boeing 777 in eastern Ukraine.

He is a vice-president of the Association of Ukrainian Cities for housing and utilities.

In the 2014 early parliamentary election, Hroysman was No 4 on the list of the Petro Poroshenko Bloc.

He has been an member of the Ukrainian parliament of the eighth convocation since November 2014.

On 14 April 2016, he was appointed prime minister of Ukraine.