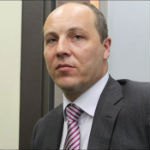 Graduated from the Lviv Ivan Franko State University, the Faculty of History in 1994, completed post-graduate studies at the State University Lviv Polytechnic in 2001, majoring in Political Science and Sociology.

Married, has a daughter

1998 - head the nationalist youth organization Heritage (Spadshchyna), a member of the national freedom movement, an organizer of one of Ukraine's first pickets.

After 1990, a Lviv regional councillor, the secretary of the council's permanent commission for youth and sports.

1991 - as a student, alongside Oleh Tyahnybok, he founds the Social National Party of Ukraine, renamed the Freedom all-Ukrainian union in 2004

1994-1998 - the head of a group of councillors in the Lviv city council. In parallel after 1996 he heads the society for assistance to the Armed Forces and Naval Fleet of Ukraine, called the Patriot of Ukraine.

1999 - the editor of the popular science magazine Oriyentyry

During the Orange Revolution in November-December 2004, he is a commandant of the Ukrainian House in Kiev.

2005 - the leader of the Ukrainians People's Union! party, reorganized later into the civil association Ukrainian House. In 2006, he is elected to the Lviv city council on the list of the Our Ukraine bloc.

2007-2012 - a member of the Ukrainian parliament of the sixth convocation from the Our Ukraine-People's Self-Defence bloc. He is the head of the subcommittee for control over foreign relations of the parliamentary committee for foreign affairs.

During the 2012 election, he is elected to parliament on the list of the Fatherland party (No 21). Chairs the subcommittee for legal support for Ukraine's integration into international research and education space under the parliamentary committee for science and education. Non-partisan.

November 2013-February 2014 - a commandant of Maydan's Self-Defence, one of its front-line figures

27 February - he is appointed the secretary of the National Security and Defence Council (NSDC0 of Ukraine.

On 7 August 2014, he is dismissed from the post of the NSDC secretary by President Petro Poroshenko's decree.

After November 2014 - a member of parliament of the eighth convocation

14 April 2016 - he is elected parliament speaker to replace Volodymyr Hroysman.

Late on 24 December 2014, an unidentified individual threw a grenade when Parubiy was meeting his Self-Defence allies near the Kiev Hotel when there were several other MPs as well. A criminal attack over hooliganism was opened.

On 1 February 2015, Interior Minister Arsen Avakov said that the attack was organized by a terror group and three were detained in the case. The minister accused Interior Troops commander Stanislav Shulyak of organizing the attack.