Even the Party of Regions of President Viktor Yanukovych's times was not that fast. It took the notorious "16 January laws", to which Self-Reliance MP Olena Sotnyk likened the "Lutsenko law", five days to come into effect after they were adopted.

Yes, there were some single incidents in Yanukovych's time when bills were signed into laws the same day (for example, on dropping the requirement to vote with ballots for bills on amendments to the constitution or on simplifying the procedure for stripping MPs of immunity), however Holos Ukrayiny was never as quick to print them as in this case. 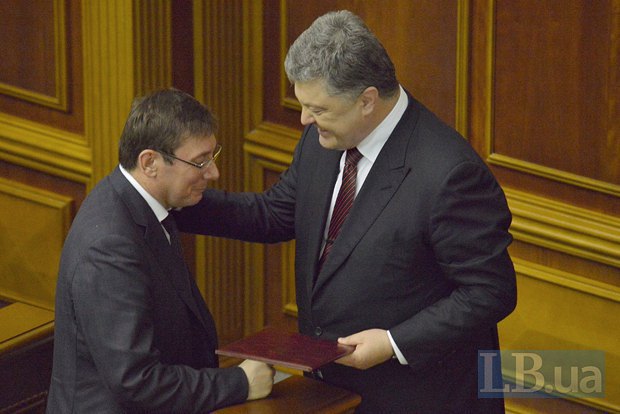 The law does not specify on what posts one can build "experience with legislative and/or law-enforcement bodies". Thus it expands the range of persons who can claim the post of the head of the Prosecutor-General's Office (PGO). This means any MP who spent five years in parliament can chair the PGO. And not only MPs… Their assistants or even the regular staff of parliament. Or common employees of law-enforcement bodies: the Security Service of Ukraine (SBU), the Interior Ministry or the PGO.

Namely these new requirements to the prosecutor-general indicated that it was tailored to Yuriy Lutsenko whose CV mentions four years with the Interior Ministry and five years as a member of parliament.

Legal education is mandatory component of qualification requirements to prosecutors in Europe, including in Poland, Estonia, Georgia etc. In some countries of the words, a candidate for prosecutor is only required to have professional legal experience. And such jobs are clearly indicated: prosecutor, lawyer, judge or notary. But not an MP or interior minister, which are political posts. And any education (not just in law) is not mandatory.

For example, Recommendation Rec(2000)19 of the Committee of Ministers to Member States on the Role of Public Prosecution in the Criminal Justice System, adopted on 6 October 2000, says that training is both a duty and a right for all public prosecutors, before their appointment as well as on a permanent basis. States should therefore take effective measures to ensure that public prosecutors have appropriate education and training, both before and after their appointment, the recommendation ads.

Any decision taken by the prosecutor-general who has no legal education or job experience may be put in doubt or voided by the European Court of Human Rights.

The prosecutor-general has procedural rights (in the criminal, civil, economic, administrative justice and during the hearing of administrative cases). In other words, every day he had to take decisions and sign special legal document, including notices of suspicion (to lawyers, judges, prosecutors, MPs and others), permits to extend pre-trial investigations, extradition requests and so on. What is more, the prosecutor-general, according to rank, is a member of the Supreme Justice Council together with the chairman of the Supreme Court of Ukraine and the justice minister. Let me remind you that this is the body which forms the judge corps. A member of the Supreme Justice Council, in particular, must have a university degree in law and job experience in law of at least 15 years. 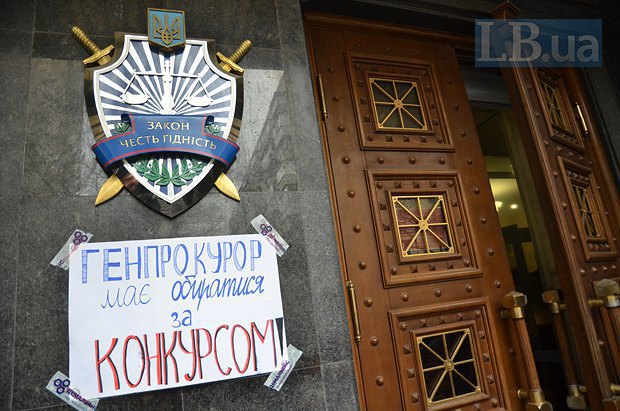 At the same time, the so-called "Lutsenko law" introduces a number of legal amendments which, according to experts, re-subordinate prosecution bodies to the new prosecutor-general and stop the reforms in this sector which were announced by Petro Poroshenko.

In particular, it was the president who in October 2014 insisted that parliament should pass amendments to the Law "On prosecutor's office", which introduced a new procedure for appointing prosecutors and envisaged the establishment of the Assessment and Disciplinary Commission and the Council of Prosecutors. District prosecutor's offices and a number of PGO departments were disbanded to implement these novelties and prosecutorial self-governing bodies were established.

The explanatory note to the bill adopted on 12 May reads that "currently, the procedure for establishing the mentioned bodies is under way, which is why it is necessary to delay the coming into force of certain clauses of the Law of Ukraine 'On prosecutor's office'…" However, the formation of both the Assessment and Disciplinary Commission and the Council of Prosecutors is nearly complete. The commission is only missing three representatives of the parliamentary envoy for human rights, who are to be endorsed by the parliamentary committee for law enforcement.

The reason why the law, which regulates the work of the Assessment and Disciplinary Commission and the Council of Prosecutors, was delayed is likely because the process of their formation was actively criticized by public activists and politicians who alleged that respective conferences had been "directed by the PGO leadership" while the members of these bodies are "old cadres" from the prosecution system.

Introducing Lutsenko as the candidate for prosecutor-general to parliament, Petro Poroshenko once again described the changes to the law on prosecutor's office as reformist ones and admitted that the first years of the PGO reform had not yielded any results:

"… The launch of the General Inspectorate, which allows for the start of a resolute fight against corruption inside the prosecution system instead of the sham which certain wirepullers dressed in prosecutors' uniforms tried to organize, to absolutely no avail.

The steps, which allow us to engage new patriots who will have a real opportunity to drive true changes in the prosecution system, are a huge step towards the prosecution reform, I think.

Unfortunately, the first steps towards the reform were not really successful. And this is not because the tests were wrong – I would like to stress that the tests were properly written – and not because the exams were improperly organized… I would like to stress that the prosecution reform cannot be implemented by only changing the prosecutor-general. People who have legal or court practice, people who have knowledge and experience will not work for 2,500 hryvnyas [a month]…"

However, the functions of the PGO General Inspectorate have not been regulated by law.

The Law "On the State Investigation Bureau" was also amended.

In particular, prosecuting investigators for two more years will continue to be in charge of pre-trial investigations into criminal proceedings opened before the launch of the State Investigation Bureau. Earlier, the head of the special investigation department of the PGO, Serhiy Horbatyuk, said that prosecutor's offices would lose their investigative functions as of 1 March while the Anticorruption Bureau was not operational yet, which would leave the Maydan cases hanging in the year. Another novelty of the so-called "Lutsenko law" concerns amendments to the Criminal Procedural Code with regard to a so-called special pre-trial investigation for conviction in absentia. 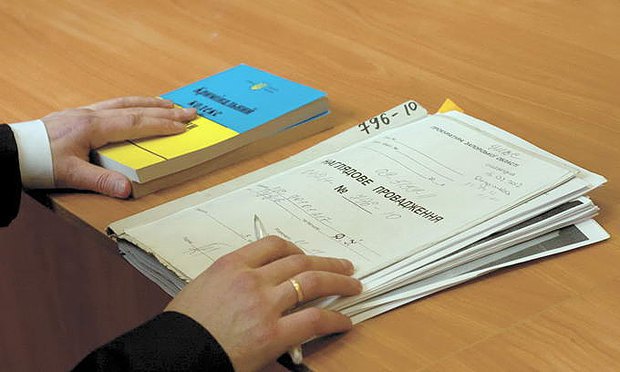 In particular, it says a special investigation (according to certain articles of the Criminal Procedural Code) applies to:

- suspects (except for underage ones) hiding from investigative bodies and court to avoid criminal responsibility, who were put on an interstate and/or international wanted list,

- suspects who have been hiding from investigative bodies and court for more than six months to avoid criminal responsibility and/or against which there is factual information that they are outside Ukraine, on a temporarily occupied territory of Ukraine or in the antiterrorist operation area.

It is obvjous that, if enforced, these clauses may result in human rights abuses. The conclusions published by the main research and expert department of the Ukrainian Parliament read that a special pre-trial investigation can be held in exceptional cases. To initiate it, one must have not just any factual information about a person's stay on a certain territory but a proof of the fact, meaning the factual information obtained in accordance with the procedure regulated by the Criminal Procedural Code, on the basis of which an investigator, a prosecutor, an investigating judge and a court establish the presence or absence of facts and circumstances which matter in criminal proceedings and have to be proven (Article 84 Part 1 of the Criminal Procedural Code).

Second, the information that a person is staying in the antiterrorist operation area may not be used as grounds for holding a special pre-trial investigation if this person is on the territory controlled by Ukraine because an attachment can be applied in this case. So either MPs made a mistake or they created a legal collision once again, which will result in multiple legal interpretations of this clause.

A special pre-trial investigation and later conviction in absentia will result in violations of the basic principles of justice which should be competitive, unbiased, open and direct. As a result, verdicts in criminal cases where a suspect or a convict is absent may get "spawned". This, in its turn, will bring about new abuses of human rights and new complaints to the ECHR.

Asked why Yuriy Lutsenko is the only candidate for the prosecutor-general's post, one member of the Petro Poroshenko Bloc faction told LB.ua said that "he [Lutsenko] did not spend 18 months in jail in vain…", hinting that he had his own motives to remind prosecutors about this. 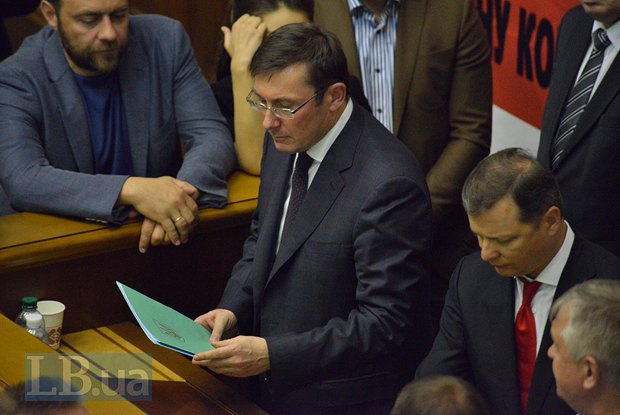 
Poroshenko also recalled Lutsenko's prison term on the day of voting in parliament:

"I am certain that Yuriy Lutsenko has a bigger moral right to demand justice. He suffered for his beliefs while some MPs effectively collaborated, including with the previous authorities. He did not betray his ideas… We now need to have in the Prosecutor-General's Office a heavyweight who will not be guided by revenge or desire to settle scores. This will be the prosecutor-general who will rely exclusively on his sense of justice."