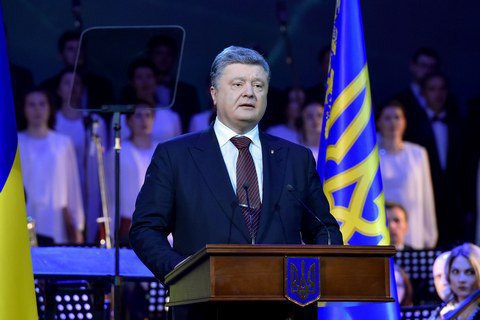 President Petro Poroshenko has supported the idea of establishing a Crimean Tatar autonomy.

His press service quoted him as suggesting that amendments to Article 10 of the Constitution of Ukraine, which concerns the Autonomous Republic of Crimea, should be initiated in this regard.

"Although late, we have finally realized the necessity of establishing the national autonomy of Crimean Tatars in Crimea with full guarantee of equal rights and civil liberties of ethnic Russians, Ukrainians and other ethnic groups of the peninsula," he said at the evening-requiem in memory of victims of genocide of the Crimean Tatar people.

Crimean Tatars have been publicly discussing the idea of a national and territorial autonomy for two years now.

In the autumn 2015, the leader of the Crimean Tatar self-styled government Mejlis, Refat Chubarov, suggested that the Constitutional Commission should consider amending the constitution accordingly.

Currently, Article 10 of the constitution has six chapters describing Crimea is an inalienable part of Ukraine, but having its own constitution, parliament and government.

"Crimea was, is and will remain an integral part of Ukraine. The country-criminal will be forced to return the loot sooner or later no matter how long the process of de-occupation may take. Such crime as annexation has no statute of limitation in international law," the president said.

The head of state is also planning to raise the issue during a series of meetings with international leaders at the World Humanitarian Summit in Istanbul on 23 May. His delegation will include Crimean Tatar leader Mustafa Dzhemilyev, Refat Chubarov and Eurovision song contest winner Jamala.

"This war will be over for Ukraine when the last piece of our land in Crimea and Donbas is liberated, when the last invader leaves the Ukrainian land. Until then, we must be strong and firm in our faith. Crimea is not Russia. Crimea is Ukraine. And Ukraine is Europe," Poroshenko concluded.