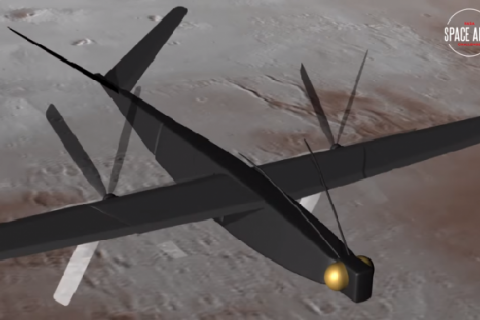 An aircraft project for Mars, Mars Hopper, developed by a team of Ukrainian inventors, won the World Hackaton NASA Space Apps Challenge in the People's Choice category, according to the official website of the competition.

However, after NASA has checked the purity of the ballot using its methods of analysis, Ukrainian inventors took lead.

The team learned of his victory three days before the official announcement of the results on May 26 but the representatives of NASA have asked them in an official letter to keep their victory a secret, reports AIN.ua.

"I hope NASA has taken interest in our project. If so, we would like Ukraine to take part in it. When we were designing the project, we were counting on it. Almost all the technologies for its implementation are available in Ukraine. It would be great if our country has taken a worthy place among the space nations," said the project engineer Oleksandr Butkaliuk.

The team is now planning to knock together two prototypes of their invention – one for terrestrial and one for stratospheric tests. The designers have voiced their intentions to the Agency and now are waiting for reaction.

In the meantime, they are preparing for a trip to Cape Canaveral to watch the launch of the rocket, which will occur on 8 September. The team does not know, though, whether can go all together, because they will have to pay for the trip themselves.

Who are behind the MarsHopper project?

SpaceX company plans to send a spacecraft to Mars no later than 2018.