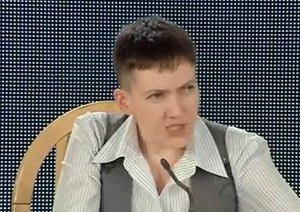 Verkhovna Rada deputy Nadiya Savchenko wants the war in Donbass to end as soon as possible and believes Ukraine may make concession for this purpose.

"I want peace. But am I ready to achieve it at any cost? There need to be compromises, it is logical and reasonable, because wars end in compromises, for the victorious and the defeated,' Savchenko told a press conference on 26 May.

"I am ready both to fight and make peace. If they want the same, then we'll get along," she said.

Savchenko described the conflict in Donbas not a civil war or the ATO, but a Russian-Ukrainian war.

Savchenko stated against elections in Donbas without Ukrainian control of the border with Russia. She supported the Minsk agreement, though not without certain reservations.