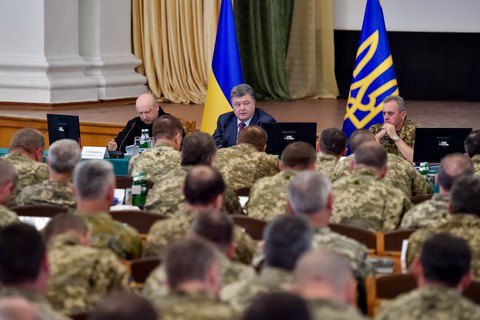 President Petro Poroshenko ordered to develop the infrastructure and material and technical basis in order to, if need arises, to promptly launch a guerrilla movement in the country.

"Protecting the state is not only the duty of the president and the General Staff, but of every citizen of Ukraine", Poroshenko said during a scientific-practical conference "Lessons of hybrid war: military aspects", which took place on 14 June in the Ministry of Defence.

Also, there should be a detailed plan of general mobilization and operation of the country under martial law in the event of a full-scale invasion, the president said.

"The hybrid warfare unleashed against our country requires a comprehensive asymmetric response to the threat. The defense against hybrid aggression should also be a hybrid," said Poroshenko.

He pointed out the importance of a robust and active defense, which defeats the purpose of the enemy offensive, active diplomacy, aimed at garnering international support to Ukraine, the continuation of international sanctions against the aggressor.

Poroshenko also requested to explore the possibilities of the territorial defense of the land.

"We should thoroughly consider the rapid deployment of territorial defense, taking into account the experience of the past two years," he said.

The want the defense issues to be further discussed at a meeting of the National Security Council and submit to the government for approval.

In September, 2014, the General Staff voiced plans to create a guerrilla movement. The idea was soon abandoned, though