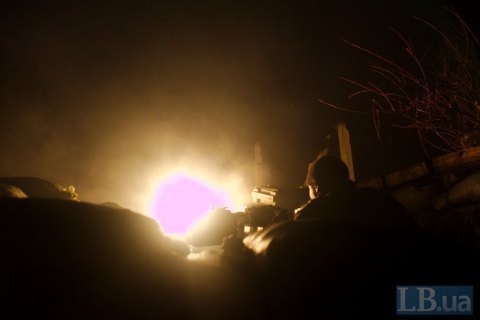 The number of attacks in Donbas has been reportedly on the rise over the past days, yet the intensity of shelling across the contact line increased dramatically on 14 June. Of the 58 reported enemy attacks last day, 32 were in Mariupol, 24 in Donetsk direction, and two in Luhansk direction, according to the headquarters of ATO.

The militants on 18 occasions used mortars, three times - artillery and once used a tank.

"In Mariupol direction, the hottest place was near Pavlopil, where the enemy shot mortars and 122-mm self-propelled artillery, led the assault actions. In the vicinity of Krasnohorivka, an enemy tank twice shot at our positions around 22.00," the press service said in a statement.

Ukrainian positions near Mariyinka, Taramchuk and Novotroitske came under mortar fire, while in the area of Hnutove, Talakovka, Chermalyk and Shyrokyno, the enemy fired rocket-propelled grenades and large calibre machine guns. The militants used 122 mm self-propelled gunnery and fired four shells at the village of Chermalyk.

In Donetsk direction, the enemy was shooting at Ukrainian positions near Nevelske, Pisky, Avdiyivka, Verhnyotoretska and fired mortars in Luhanske. The Putylivska coal mine in Butivka was shelled from heavy mortars and 152 mm artillery.

In the area of Svitlodarsk, the militants attacked the Ukrainian military using heavy machine guns and automatic grenade launchers.

In Luhansk region, the enemy shelled the army positions outside Tryokhizbenka and Nyzhnyoteple.

On Monday, six Ukrainian soldiers were wounded in the ATO zone.