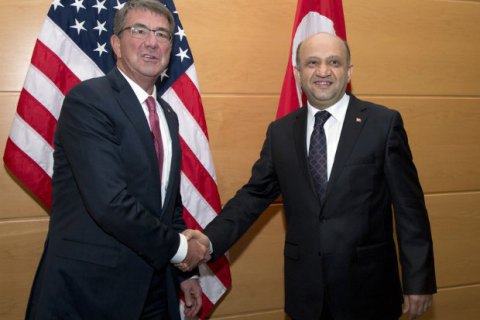 Turkish Minister of National Defense says the Black Sea must become a zone of peace, tranquility and prosperity

"Turkey will not allow to turn the Black Sea into a Russian lake," the Minister of National Defence of Turkey Fikri Isik told reporters on 15 June in Brussels, where he participated in a meeting of NATO defense ministers

He said this idea has been previously voiced by the President of Turkey Recep Tayyip Erdogan. "Turkey supports the transformation of the Black Sea into a zone of peace, tranquility and prosperity. All Ankara's strategy is based precisely on this concept," said the minister.

At the same time, Isik drew the reporters' attention to the forthcoming summit of NATO leaders in Warsaw.

The minister said that NATO countries need to keep the channels for dialogue with Russia open, and, at the same time, strengthen own defense potential. "The forthcoming summit is also very important in the context of solidarity with Ukraine," said the Turkish Minister of National Defense.

He also touched upon the commitments NATO has made to Turkey on the issue of the protection of the country's borders. "We expect the implementation of the commitments taken by the Alliance. This issue was the focus of my meeting with the NATO leaders," Fikri Isik stressed.

"Once again, we have brought to the attention of the American side that structures like the PYD and YPG (Syrian branches of the PKK terrorist groups.) are terrorist and any cooperation with them is fundamentally wrong. We expect Washington will take into account Ankara's sensibility on the issue and will treat the PYD and the YPG like they treat the PKK. We will continue to keep this issue in the spotlight. "