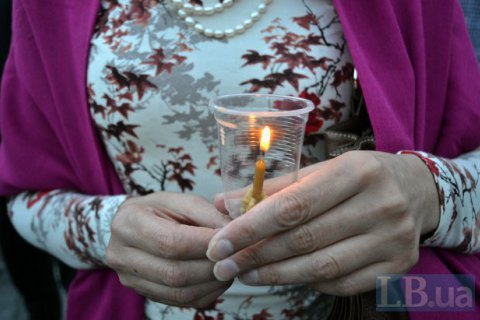 Among the participants were MPs Refat Chubarov, Mustafa Nyem, head of the Anti-Corruption Prosecutor's Office Nazar Kholodnitskiy, the Minister of Youth and Sports Ihor Zhdanov, one of the leaders of the party Democratic Alliance Vasyl Hatsko, well-known journalists, and Belarusian opposition activists.

Senior Ukrainian officials have expressed condolences to the families and friends of the deceased. Head of the National Police, Prosecutor-General, the Speaker of the Verkhovna Rada and President Petro Poroshenko urged a speedy investigation of the resonant murder, for which purpose all available resources must be used.

Kyiv residents brought flowers at the crossroads of streets of Franco and Khmelnitsky, where a Sheremet was killed.

The explosion occurred at 7:45 am when Sheremet was heading to the radio Vesti, where he hosted a morning show. Passersby managed to pull Sheremet out of the car, but he died. After the explosion, the car caught in fire and completely burned down. An expert said the explosive device was fixed to the bottom of the car. An adviser to the Interior Minister, Zorian Shkyryak, said the homemade explosive device of 400-600 g of TNT equivalent was possibly detonated remotely.

The Subaru XV Sheremet was driving belonged to his partner, Olena Prytula, the owner of the news site Ukrayinska Pravda. Prytula was not in the car. President Petro Poroshenko, called the journalist’s death a “terrible tragedy” and ordered specialists from the US and the European Union be brought in to assist the investigation. Poroshenko instructed to ensure protection for Pritula.

The prosecutor's office is investigating the death of Sheremet as a murder, related to his professional activities. President Poroshenko has said he does not rule out that the murder of Sheremet was aimed to destabilize the situation in the country. He ordered specialists from the US and the European Union be brought in to assist the investigation.

Pavel Sheremet will be buried in Minsk.