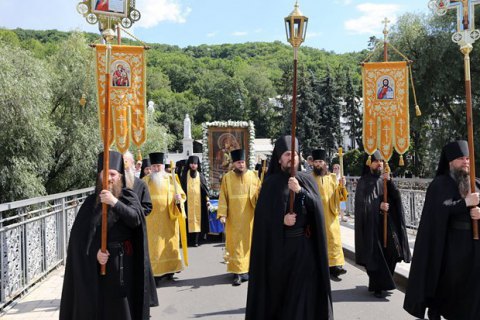 The Security Service (SBU), Interior Ministry, National Police, National Guard and the prosecutor's office will create a coordinating council for the protection of the religious procession, organized by the Ukrainian Orthodox Church (Moscow Patriarchate). The heads of these departments on 20 July held a meeting with representatives of the clergy and former volunteer battalions.

The head of the SBU Vasily Hrytsak said he had he had nothing against the participants of the march, but there was information that the event can be used by anti-Ukrainian forces to destabilize the situation in the country.

"The SBU receives information from various sources about the presence provocateurs among the faithful. Therefore, the responsibility for the security of the religious procession, of course, is also on the organizers of this event," he said.

"We will not allow a drop of blood, but, if needs be, unpopular methods will be used," he warned.

The head of National Police Khatia Dekanoidze said the police officers are planning to tighten security measures along the route of the procession. In particular, the police officers, if necessary, will carry out the surface survey, pass the people through metal detectors etc.

The procession began on July 3 at the Svyatohorsk monastery in the east of Ukraine, and on July 9 in the Pochayiv Lavra in the west of the country. On 27 July, on the eve of the celebration of the Baptism of Rus-Ukraine, the participants of both rallies are planned to meet in Kyiv on St. Vladimir's Hill and pass along to the Kyiv-Pechersk Lavra, where a solemn liturgy is planned to be held.

Speaker Andriy Parubiy has said that the procession was organized by the Kremlin to destabilize the situation in the country.