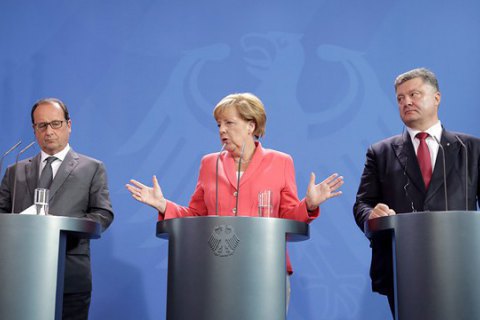 President of Ukraine Petro Poroshenko, French President Francois Hollande and German Chancellor Angela Merkel agreed to meet on October 19 in Berlin to persuade Russia to implement the security provisions of the Minsk Agreements.

In a tripartite telephone conversation "They discussed the security situation in the Donbass region of Ukraine. President of Ukraine stressed on the importance of a common position, and member states of the European Union on the eve of the European Council Summit, which will take place 20-21 October 2016 in Brussels, where the strategy of relations with Russia will be discussed," the presidential press-service said in statement on Tuesday, 18 October.

Germany government spokesman Steffen Seibert confirmed to Deutsche Welle that the meeting of heads of the Norman Quartet will take place on October 19 in Berlin.

On 15 October, President Poroshenko said that Ukraine will not proceed to the implementation of political provisions of the Minsk Agreements, until the provisions on the cease-fire and the withdrawal of Russian troops are completed.

Russian President Vladimir Putin said in response that the military and political provisions of the Minsk Agreements shall be implemented in parallel.

Previously, the leaders of the Norman Quartet met on October 2 in Paris.