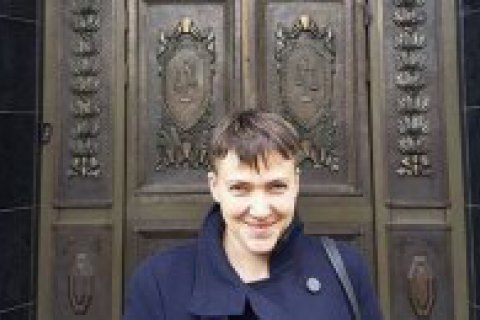 MP Nadiya Savchenko on Wednesday, 26 October arrived in Moscow to attend a meeting of the Supreme Court of Russia in the case of Ukrainians Mykola Karpyuk and Stanislav Klykh, her former lawyer Ilya Novikov reports on Facebook.

Russia's Supreme Court will consider an appeal against sentences of Ukrainians Karpyuk Nicholas and Stanislav Klykh.

Karpyuk was arrested in March 2014, Klykh - in August 2014. Russia's Investigation Committee claims that Karpyuk together with the late Oleksandr Muzychko led the "Viking gang" that allegedly committed crimes in the Chechen Republic in the 90s. Investigation Committee said that the current leader of the Right sector Dmytro Yarosh, and also Yuriy Dolzhenko, Klykh and other Ukrainians were members of Viking.

On May 17, the Supreme Court of Chechnya found Karpyuk and Klykh guilty of running a gang, that has murder two or more persons in in the line of duty and attempted murder as part of armed groups in the North Caucasus in 1994. Karpyuk was sentenced to 22.5 years in prison, Klykh – to 20 years.

The jury found Klykh "deserving of leniency on charges of involvement in the gang and murder" while Karpyuk did not deserve leniency.

Russian human rights watchdog Memorial has found gross errors and discrepancies in the indictment. For example, 18 of the 30 soldiers, allegedly killed by Ukrainians, died at a much greater distance from the areas of possible participation of Ukrainians in the clashes. Memorial's COB Alexandr Cherkasov even addressed the court with a detailed analysis of inconsistencies, but it did not affect the decision of the court.