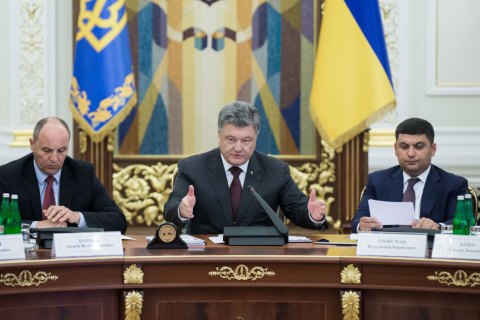 President Petro Poroshenko says Ukraine has risen to 80th place in the ranking of Doing Business Rating, compiled by the World Bank.

"As far as I know, the World Bank will publish in a half an hour the Doing Business Rating in 2017 by the World Bank Group. We have received these papers earlier today. I do emphasize that in 2011-2013, Ukraine was at 149-152 places. Today, Ukraine is ranked 80th," the president said during a meeting of the National Council on Reforms on 25 October.

"I would like to draw attention, however, to three indicators. The first indicator is taxation where Ukraine has risen from 107 to 84 place. Protecting investors -. Ukraine has risen 18 up. Enforcing contracts - a 17-notch improvement," the president said.

"Overall, the two-fold improvement of Ukraine [in comparison with the times of Yanukovych] is the appreciation of the efforts that we are making in order to carry out reforms in our country," Poroshenko concluded.