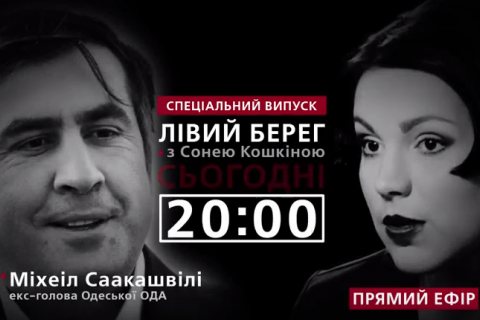 Saakashvili's resignation has become one of the most resonant events in the political life of Ukraine of late that eclipsed even the public outcry over e-declarations. Ukrainian government has had high hopes for the former president of Georgia, which has become the face of positive transformations in his country. The governor of Odessa region hitherto was given a previously unseen carte blanche of opportunities and freedom. However, Saakashvili said he did not want to play by the rules of modern Ukrainian realities and announced breaking any relationship with President Petro Poroshenko.

What was the bone of contention? What are Saakashvili's real political ambitions in Ukraine? How serious are his intentions to create an own party and seek early parliamentary elections? You will find answers to these questions today at 20:00, in the special issue of the talk show Left Bank with Sonya Koshkina on TV Channel 24.

The guest of the program - Mikheil Saakashvili, the former governor of the Odessa Region.