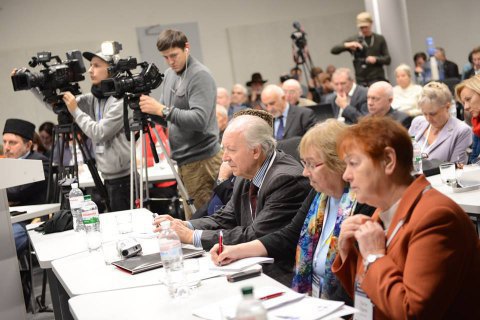 Former political prisoners of Communist regimes and rights activists from 15 countries have issued an address to the international community, in which they called for more effective policy with regard to the illegal occupation of Crimea and Donbas.

The document to this effect was adopted at the 2nd Crimean forum in Lviv, an LB.ua correspondent has said.

"We express sincere solidarity with the Crimean Tatar people forced to experience the second mass tragedy in the past 70 years. We condemn the ban on the legitimate representative of the Crimean Tatar people, the Majlis… The deoccupation of Crimea, restoration of Ukraine's territorial integrity, protection of the rights and freedoms of Crimean Tatars and other peoples of Crimea is the test of conscience for the whole world. Any concession to the aggressor, which seems to bring peace, risks global cataclysms… The Western unwillingness to face the reality, which is being justified by its unwillingness to get involved in a new cold war, only speeds up the drifting into crisis," the address reads.

The forum participants said that the violation of Crimean Tatars' rights became possible only because the Communism was not condemned and is not considered a crime against humanity.

The rights activists expressed their condolences to the bereaved families affected by the Kremlin government and its militants in eastern Ukraine and Crimea.