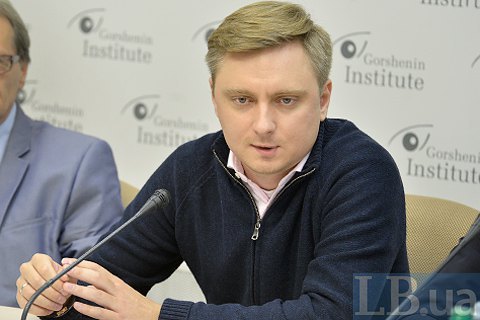 The current presidential campaign in the United States is the first in which information resources play a rather significant role. Above all, this includes the Russian propaganda whose tools have bloated over the past four years, Yevhen Kurmashov, director of political programmes at Gorshenin Institute, has said on a visit to the USA.

The Gorshenin Institute delegation is in the USA to analyse the presidential campaign and its potential impact on Ukraine and the world.

"Today we can say that Russian media resources focusing on the Western audience, including that in the USA, interpret events in the post-Soviet space and the world the way the Kremlin seems fit. What is more, they have a real-life effect on the course of the presidential election campaign," he said.

According to Kurmashov, one of the top examples is Russia Today, a TV channel which covers the US presidential election campaign almost live, its reach already being comparable with that of many other US broadcasters. RT has numerous other information services, from its news website to its accounts in the most popular social networks.

"Visiting the USA in these few days remaining until the presidential election, we have talked a lot with representatives of both political camps, including acknowledged media experts, and almost every one of them gave their assessment of Russian media resources working in the US media field. While professional opinions are often high, political ones are quite the opposite. Russian propagandists interfering in the US information space is an accomplished fact which few deny. Many of people we talked to said that Russia Today is buying the hearts of their audience, above all, by its delivery which first seems more objective than what they usually get from traditional US TV channels whose air is packed with propaganda by both campaign HQs," Kurmashov said.

The Russian media pool has a lighter way of treading when it comes to the US audience, he added.

"Unlike the presidential candidates' HQs, they send no direct messages, offer more opinions and independent assessments, and feature many familiar faces of US anchors, but at the same time their focus is more Trump-oriented, our interlocutors from the Democratic camp told us. In the situation when the two candidates are neck to neck, any factor can tip the balance to any side. One of such factors can be Russian information impact whose strength and technological proficiency can hardly be denied these days," he added.

According to Kurmashov, by gradually building the reputation and winning the trust of American viewers by creating a generally interesting information context, which is seemingly independent of the way US domestic politics operates, Russia Today stuffs the multi-million US audience with absolutely distorted and often fake news stories about the post-Soviet space, including about Ukraine.

"Viewers migrating from traditional American channels because they consider them overly politically biased increasingly more often see the situation in Ukraine through the prism of Russian news resources working in the USA and boosting their audience month by month. There is almost no alternative offer in the information space. Americans are seriously concerned about designing countermeasures. However this issue is likely to be put on hold until after the election," he concluded.