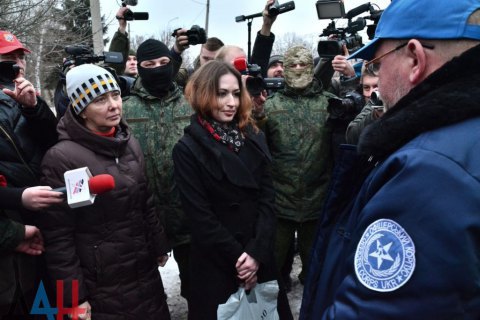 Terrorist organisations "DNR" and "LPR" on Tuesday morning handed over to the head of Ukrainian Center of captives' release Officers' Corps Volodymyr Ruban two Ukrainian women, who were held in captivity.

According to the news agency of separatists DAN, the handover procedure took place between Donetsk and Makeyevka.

Previously, the leaders of "DNR" and "LNR" Aleksandr Zakharchenko and Igor Plotnytskiy volunteered to hand Presnyakova and Svorak over to MP Nadiya Savchenko.

Olha Svorak (aka Bogdanova), a journalist from Ivano-Frankivsk when she went to the occupied territories to visit to a local militant in June. She was captured and accused of working for the SBU.

Anzhelika Presnyakovs is a former district court judge in Novoazovsk and the Court of Appeal of Donetsk Region. The circumstances of her imprisonment are unknown.