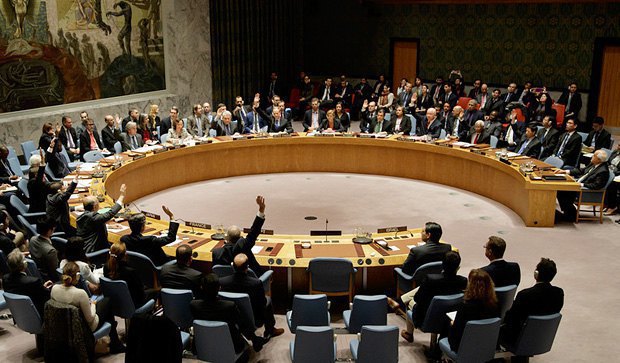 Photo: EPA/UPG
The vote of the UN Security Council on Israel, 23 December 2016
There was a hot discussion on the results of the UN Security Council vote on Israel over the weekend on social media and then in traditional media. In particular, tough criticism was directed at Ukraine which, together with 14 other member states of the Security Council (out of 15) voted in favour of banning the construction of settlements by Israel in the Palestinian territories, including East Jerusalem, because of which a war has been going on for years.

Ukrainian public opinion was mainly on the Israeli side, despite the fact that Prime Minister Benjamin Netanyahu made a case of humiliating Ukrainian Prime Minister Volodymyr Groysman by cancelling his visit to Israel.

The point made by the defenders of Israel's position is emotional: Ukraine's vote is called betrayal because Israel just recently supported the resolution condemning Russia's annexation of Ukraine's Crimea. In addition, many Israelis strongly support Ukrainians in the war with Russia, receive Ukrainian soldiers for treatment and carry out other humanitarian activities.

Admittedly, the lack of clear explanations from Kyiv about the motives behind the delegation's vote in the Security Council fuelled the growth of criticism of Ukraine's position. Moreover, not even every member of the Ukrainian understood the position of the Ukrainian diplomacy - Interior Minister Arsen Avakov suggested the Cabinet of Ministers should discuss the UN vote at its meeting. It took two days for the first official comments to appear, late at night on Sunday. Thus the diplomats have failed their task to inform from the start.

Between the devil and the deep sea

The statement published by the Foreign Ministry says that Kiev considers the text of the resolution to be "balanced" as the document calls for steps necessary for a peaceful settlement to be taken both by the Israeli and the Palestinian side: Israel must cease settlement activity and the Palestinian authority should take effective measures to combat terrorism.

The dry text of the official commentary should be understand as follows: Ukraine could not vote against the Security Council resolution and unconditionally support Israel. After all, the Israeli settlement activity contradicts international law, no-one in the world recognizes it. Breaking this rule to meet the interests of Israel is to undermine our own negotiating position in Crimea and Donbas.

To support Israel's position on the resolution is to become the only country that acknowledges a possibility and legality of the unilateral establishment of sovereignty over disputed territories on the basis of military power and historical claims. And there is no doubt that Russia would immediately use the vote as a precedent to justify its own occupation of Ukrainian regions.

"Our country consistently advocates respect for the international law by everyone and everywhere as has experienced itself the tragic consequences brought by its violation," the Foreign Ministry said. 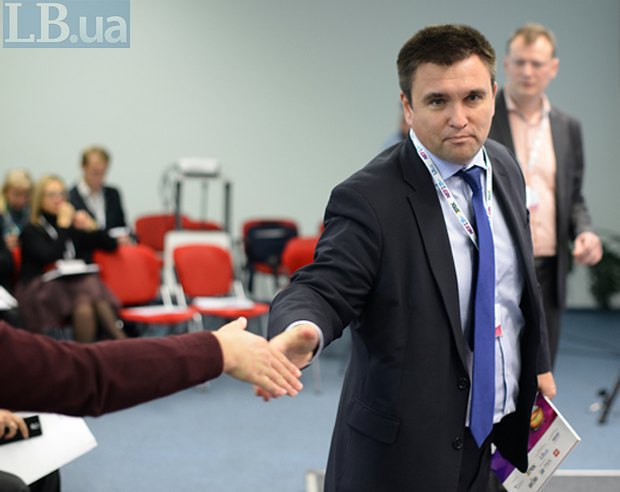 Ukraine has always maintained this position, it was not a surprise to the Israeli side and the results of the vote on the resolution which has long been on the agenda of the Security Council were not unpredictable. Obviously, a solution which would fully satisfy all the parties could hardly be expected in this. Therefore, bilateral consultations with Israeli politicians were held in advance, and the final text of the resolution was softened and repeats many of the already adopted Security Council documents. Moreover, the Ukrainian delegation made a great effort to postpone the consideration of the resolution. But the United States flatly objected.

Why did Ukraine at least not abstain from voting is the most popular argument expressed by the critics of Kyiv's police during the discussions.

There are several versions. First, there are rumours (yet to be confirmed) that Joe Biden called Petro Poroshenko to tell him that Kyiv should vote in favour. However, given that he will be gone from the White House in a couple of weeks, it is unlikely that the request of even such a high-ranking friend of Ukraine would be considered binding.

The second position is that uncertainty is at odds with Ukraine's own efforts to deoccupy Crimea and parts of Donbas and would have attested to the inconsistency of Kyiv.

Finally, Ukraine's abstention would not have helped Israel in this situation (14: 1 or 13: 2 - no difference). But Kiev would lose support from the UN Arab world in the future. This is at least 57 votes (the number of members of the Organization of Islamic Cooperation) in support of Ukraine, and with them the Arab markets for Ukrainian products which no longer have access to the Russian market.

So out of several essentially unpleasant scenarios, Kyiv chose the least unprofitable, including from the financial point of view.

What will the principle of "reciprocity" bring?

Let's be honest. After all, the state of Israel, in accordance with its national interests, has not always been a perfect supporter Ukraine until recently. For example, out of seven "Ukrainian" resolutions in the United Nations over the past three years (2014-2016, Israel actively supported Ukraine in only one, the last one. And also silently joined the co-authors in two other cases:

GAResolution on Territorial Integrity of Ukraine (A/RES/68/262 of 27 March 2014) - Israel did not participate in the vote.

GAJS on HR situation in Crimea in 2015 - did not participate in the vote.

HRC Resolution 2014 "Cooperation and assistance to Ukraine in the field of human rights" - did not participate in the vote.

HRC Resolution 2015 "Cooperation and assistance to Ukraine in the field of human rights - did not participate in the vote, co-signed the authorship.

HRC Resolution2016 "Cooperation and assistance to Ukraine in the field of human rights" - did not participate in the vote, co-signed the authorship.

HRC Resolution 2016 "The role of prevention in the promotion and protection of human rights" - did not participate in the vote.

GAResolution on "Situation of Human Rights in the Autonomous Republic of Crimea and the city of Sevastopol (Ukraine)" - voted "for" on 15 November 2016 and 19 December 19 2016.

And you may also remember the resonant speech by Israeli President Reuven Rivlin, who accused the Organization of Ukrainian Nationalists of involvement in the Holocaust from the rostrum of the Ukrainian parliament. 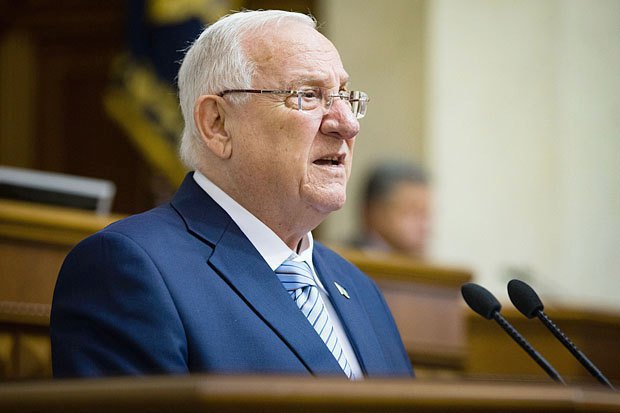 And how the resolution on the Holodomor [man-made famine in Ukraine in 1930s] disappeared from the Knesset in November after Putin's call to Netanyahu. Kyiv "swallowed" down these incidents, understanding (though not sharing) Israel's motivation.

And how Israel, acting on Moscow's request, refused to sell drones to Ukraine, saying it did not want to spoil relations with either party. And Netanyahu pays regular visits to Russia to see Putin because it corresponds to the interests of Israel. "Netanyahu has frequently travelled to Russia recently and talked a lot with the Russian president over the phone. Fair enough, Russia is a country with which one should definitely learn how to build a strong relationship. Still each time, Russia voted against Israel in international organizations. The same happened this time as well. And what does Netanyahu? He cancels the Ukrainian prime minister's visit to Israel scheduled for this week!

Does that mean that Netanyahu is also planning to spoil relations with Russia over its anti-Israeli vote in the UN Security Council? With all other countries that voted against Israel? Or does he only flex his muscles with regard to those who he feels to be weak," former Israeli Foreign Minister Tzipi Livni commented on Netanyahu's decision.

And no-one ever heard a word of protest from Kyiv in this regard.

"International diplomacy cannot work by means of emotional psychoses of individual politicians. Had Ukraine reacted as emotionally to the facts of a not quite friendly behaviour of individual representatives of friendly Israel, there would have long been no friendship between the countries. Therefore, both countries' politicians must show prudence and composure to prevent the deterioration of bilateral relations and send a message to their societies," a senior Ukrainian diplomat told LB.ua. 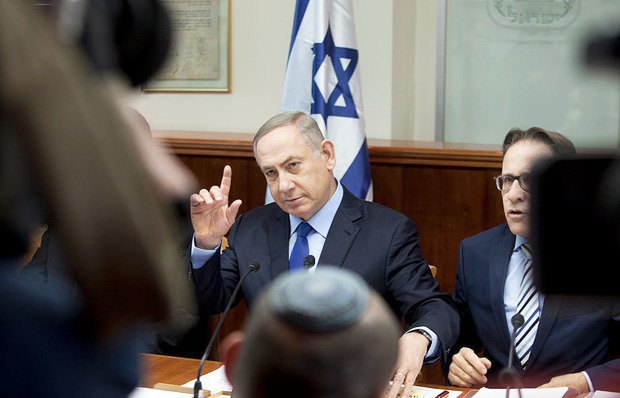 Photo: EPA/UPG
Benjamin Netanyahu
The Ukrainian Foreign Ministry's statement describes Benjamin Netanyahu's snap reaction to the Security Council vote as too "emotional." And, judging by the current development of the situation, the head of Israeli government leader Netanyahu is heading for an escalation of the conflict.

Then Netanyahu banned his cabinet members from visiting the countries which supported the anti-Israel resolution in the UN Security Council and meeting their colleagues from these countries. The ban applies to Russia, Ukraine, the UK, Spain and Japan.

In addition, at a meeting of the military-political cabinet, Netanyahu said that he would cancel the talks with British Prime Minister Theresa May, with whom he intended to meet at the economic forum in Davos.

Israel also promises to review its attitude to the UN. 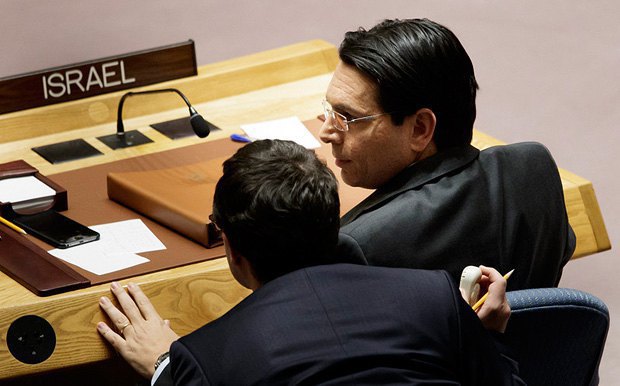 Photo: EPA/UPG
Israel's Permanent Representative to the UN Danny Danon (right) during the consideration of the Security Council resolution on Israel at the UN Headquarters, New York, USA, 23 December 2016.

Obviously, Netanyahu would not have dared such an escalation unless he had been assured of absolute support from the future US administration. " As to the U.N., things will be different after Jan. 20th.," US President-elect Donald Trump tweeted immediately after the adoption of the resolution.

And one of the most influential US senators, Republican Ted Cruz, assured the Israeli prime minister of the "strong support in the Congress". He added that, together with Senator Lindsey Graham and Donald Trump, they will work together to "to significantly reduce or even eliminate US funding of the United Nations, and also to seriously reconsider financial support for the nations that supported this resolution."

Moreover, there is a reason to believe that there is a rational explanation to Netanyahu's emotionality bordering on hysteria.

First, in this way Netanyahu, who also acts as foreign minister, shifts the blame of his diplomatic failure on the states which supported the resolution (including Ukraine).

Second, by openly kicking Obama at the end of his term because of the resolution, which is seen as a kind of vengeance of the outgoing White House Democrats to Israel and personally to Netanyahu for Barack Obama's failed peacekeeping efforts in the Middle East, Netanyahu thus earns extra points in the eyes of Trump, who will move in the White House next month for the next four years.

The Israeli authorities' snap response to the resolution has launched yet another virus of "treason" in Ukrainian society. The resentment of the Israelis and Israel's friends in Ukraine is understandable. And from the point of view of their country's interests, the Israelis act logically by justifying the tough reaction against Ukraine and criticizing the actions of the official Ukrainian authorities.

However, Ukrainians should understand that Ukraine, like Israel, has its own interests, which do not always match the interests of another, albeit very friendly country.

Relations between Ukraine and Israel should not end with the resolution - and 25 years of bilateral diplomatic relations (the anniversary falls just on 26 December) is just another proof of this. It is in the interests of the future of both countries not to aggravate this diplomatic disagreement, but leave it where it came from, in the diplomatic annals. Although there is no doubt that there are plenty of those willing to fan the misunderstanding, on both sides. After all, each character in this story sees events through their capital's lens.