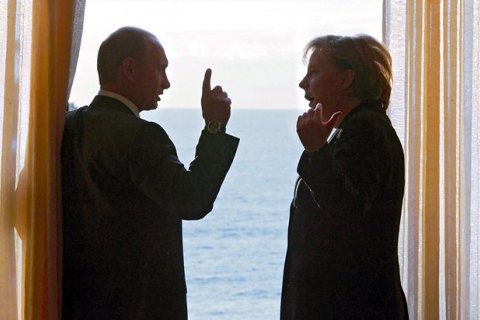 German Chancellor Angela Merkel on Tuesday held a telephone conversation with Russian President Vladimir Putin during which she asked him to use his influence on separatists in eastern Ukraine to stop the violence, Reuters reported on 7 February.

"The German chancellor and the Russian president agreed that new efforts must be made to secure a ceasefire and asked foreign ministers and their advisers to remain in close contact," German government spokesman Steffen Seibert said.

The Kremlin press service, in turn, said that the conversation was about building up diplomatic efforts at the level of Normandy Four (Ukraine, Germany, France and Russia).

"Serious concerns were expressed in connection with the escalation of the armed conflict resulting in human losses," the website of the president of the Russian Federation said.

Merkel and Putin spoke in favour of the immediate restoration of a ceasefire and supported the efforts of the OSCE Special Monitoring Mission in this context, according to the Kremlin.

The self-proclaimed Donetsk and Luhansk people's republics re financed and supported by Russia. Although the Russian military are actively involved in hostilities, the Kremlin's official position is that what is going on in Donbas is an internal Ukrainian conflict.