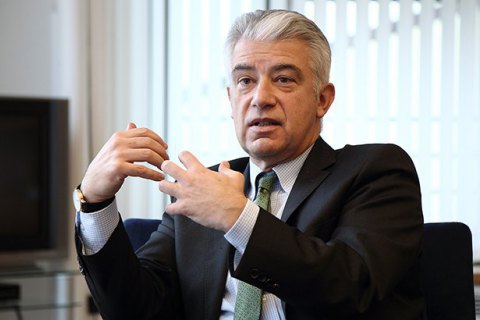 The German ambassador to Ukraine, Ernst Reichel, has said that elections in the occupied part of Donbas can be held in the presence of Russian troops.

"Without a doubt, it is rather difficult to imagine local elections in the absence of security, but I am confident that this is not something impossible, it all depends on the conditions. I can cite the historical example of the last parliamentary elections in the GDR, which were to replace the Communist regime [in Germany]. They were held in the presence of the Western group of the Soviet troops and under the Communist regime in East Germany. Nevertheless, the elections led to a change. I'm certainly not saying that the situation in Donbas is identical, I just want to say that everything depends on the circumstances. Therefore, we have to change circumstances to make the elections possible," he said.

According to Reichel, elections can be held if the conditions of their conduct meet European standards.

"Security, as well as other requirements of the electoral process, is essential. Any Ukrainian politician should be able to lead their campaign without fear. If that is impossible, then such elections do not meet the standards. However, it does not mean that elections in Donbas can take place only when there are no Russian troops or with a Ukrainian flag on every city administration building," said the ambassador.

Reichel confirmed the existence of the German-French version of a "roadmap" for the implementation of the Minsk agreements.

"The German-French version is approximately halfway between the Russian and Ukrainian versions," he said.

The German ambassador said that the Minsk agreements are not being fulfilled by both parties, including Ukraine.

In the autumn of 2014, Ukraine adopted a law on the special order of local government in some regions of Donetsk and Luhansk regions, but amended it in the spring of 2015. The law provides that a special status will come into force after democratic elections are held in the occupied territories of Ukrainian Donbas.