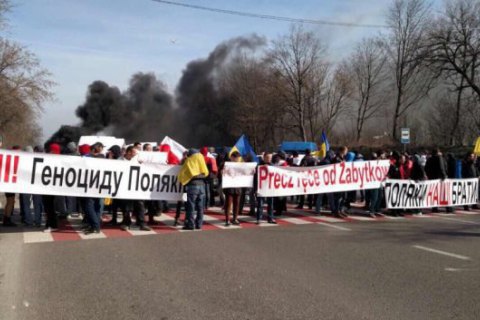 The shooting attack on the Polish consulate in Lutsk and a synchronized attempt to block the Lviv-Rava-Ruska motorway are links of a targeted subversive act masterminded by one centre, that is Russian special services, the Security Service of Ukraine (SBU) has said.

The SBU recalled that a shot from a handheld antitank grenade launcher was made at the administrative office of the Polish consulate-general in Lutsk at 00.08 Kyiv time on 29 March.

At 10.15 on the same day, a group of around 100 people attempted to block the traffic on the Lviv-Rava-Ruska motorway. The event was to last until 22.00 and its participants were prepared to put up resistance to law enforcers.

"The time and the way in which the event was organized suggest both provocations were coordinated in order to escalate Ukrainian-Polish interstate relations and the operative situation inside the country," the SBU said.

According to it, provocation participants were paid 150-200 hryvnyas (less than 10 dollars) to burn tires and hold the prepared posters "Volyn in hearts" and "Poland remembers you". There was only one ethnic Pole among them.

There were also people without permanent place of residence and 22 minors. Among its organizers are a man originally from Luhansk Region and a female Lviv resident who is registered with a mental facility.

Law enforcers unblocked the traffic and interviewed 92 detainees. They were found to carry written and electronic guidelines for the event, flames and smoke bombs.

"As the special services learnt, the customer for the implementation of the illegitimate idea of Russian special services is the leader of the Nazhdak radical group, Mykola Dulskyy, who is hiding in Russia and who is wanted by Ukrainian law enforcers over murder threats. Dulskyy is a known agent of influence of Russian special services, who has been actively engaged in anti-Ukrainian efforts since 2015. It also transpired that his group was involved in paid protests near the Central Electoral Commission on 15 March," the SBU said.