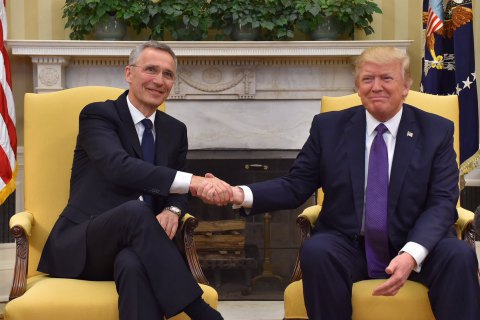 Secretary General of the North Atlantic Alliance Jens Stoltenberg during his visit to Washington, discussed with US President Donald Trump strategic issues of collective defense capabilities and NATO funding, VOA reported on 13 April.

"NATO is carrying out a powerful strengthening of collective defense since the Cold War caused by Russia's actions after the illegal annexation of the Crimea and support for the conflict in eastern Ukraine," Stoltenberg said, stressing the need for Russia to comply with the ceasefire and Minsk agreements.

The secretary general said that the Alliance should ensure that no NATO allies "suffered what Ukraine is experiencing because of Russia from 2014".

The world needs unity of allies because of the violation of the world order by the actions of Russia, he stressed.

"We do not want a new cold war, a new arms race ... in fact, we are convinced that the prerequisite for a political dialogue with Russia is our power and unity," Stoltenber told a White House press conference.

Earlier, Stoltenberg urged to seek a political solution to the crisis in Ukraine. He once again stressed that Russia should "use all its influence on separatists in the east of Ukraine."