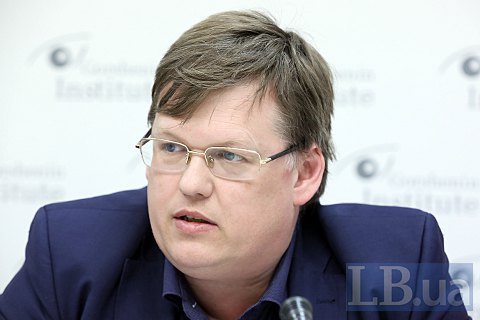 The Vice-Prime Minister of Ukraine Pavlo Rozenko called "delusional" an article by the head of the International Monetary Fund (IMF) in Ukraine, Ron van Rooden, published by Economichna Pravda.

"After the words of the 'expert' that 'the basic structure of the pension system has not changed since the Soviet era', my desire to read this whole nonsense to the end has evaporated... And the ramblings on the introduction of the second level are just beyond any comment. This man simply has no clue about what it is and how it works... Horribly unprofessional!"

Speaking on the TV Channel 112-Ukraine on Tuesday, 18 April Rozenko elaborated on his categorical position.

He recalled that the memorandum signed between Ukraine and the IMF provides a roadmap of reform of Ukraine's pension system, so "returning to the discussion on whether the retirement age should be raised or not, or whether the length of insurance term should be extended or not is counterproductive."

"Plus I was a bit concerned about the thesis that Ukraine has a Soviet pension system and is its prisoner, which is not entirely true, because we eliminated it back in the early 2000s. It was then that we adopted a pension reform that completely abolished the4 Soviet pension system. The problem is, however, that we have not completely transferred to the European three-tiered model of pension insurance," Rosenko said.

In his article, Van Rooden warns that the introduction of a funded system in Ukraine would be premature, considering the current level of development of financial markets and the legal and regulatory framework in Ukraine. He believes that the government at this stage should instead address the shortcomings of the current pension system.

Van Rooden argues that the low retirement age, combined with the opportunities for early retirement, led to the fact that Ukraine has more than 12 million pensioners, which is about 30% of the population.

He points out that Ukrainians retire on average much earlier than workers in other countries of the region. The average retirement age for Ukrainian men is about 58 ½ years, and at least 56 years for women against 63.6 and 62.6 years respectively in the EU.

Earlier, Ukrainian Cabinet would repeatedly say that it had persuaded the IMF not to require increasing the retirement age to 63 years.

Ukraine in its deal with the IMF pledged to carry out pension reform before the end of April and enforce it on January 1, 2018. The reform, according to the memo, should envisage a new set of retirement options with a broader range of retirement age, depending on the total length of service, and pension payments that encourage citizens to opt for later retirement; and guarantees that Ukrainians will receive pensions that are proportionate to the contributions paid.

The draft memorandum of Ukrainian government with the IMF, made public in January, provided that Ukraine would undertake to carry out pension reform by the end of March 2017 with an increase in the retirement age: for men, four months each year, beginning in July 2017; for women - six months each year, starting in 2021.

By 2027, the retirement age should reach 63 years for both men and women.