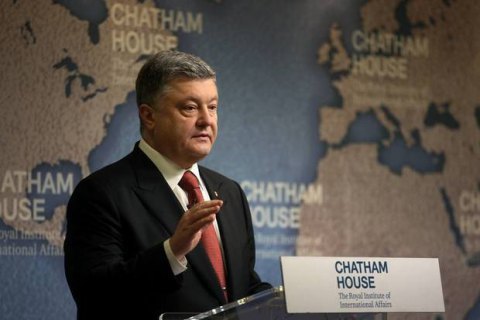 President Petro Poroshenko says the talk with Russian President Vladimir Putin during the recent telephone conversation in the "Normandy format" once again convinced him that the Kremlin needs control rather than peace.

Speaking at the Royal Institute of International Affairs (Chatham House) in London on 19 April, Poroshenko gave his perspective on the future of relations between the West and Russia.

"The Russians are not interested in achieving peace, they are interested in gaining control. I felt it again on Monday, when, together with Chancellor Merkel and President Hollande, we held telephone talks with President Putin. It was yet another manifestation of Moscow's empty promises. Their attitude is 'If you want peace, you can have it, but only on our conditions. No compromises. Just – the rule of force,'" Poroshenko said.

In his speech, Poroshenko recalled the famous aphorism by Winston Churchill: "An appeaser is one who feeds a crocodile, hoping it will eat him last.

"There is a place where these words of wisdom are as obvious as at that time in the United Kingdom. This place is called Ukraine, and there is a crocodile that some people, if not many, would gladly feed in abundance today to secure their tomorrow. Many people believe that once Russia is satiated, it will cease to pose a threat. I beg to differ: Russia does not have a problem with hunger, it has a worldview problem. It does not believe in such things as democracy and human rights, it believes in things like "world domination" and "spheres of influence". It does not play by the rules. It believes only one rule: "Russia always wins. Always. In spite of everything." he said.

Therefore, Poroshenko believes, the West should maintain pressure on Russia, including in the form of sanctions.

"Don't believe those who say sanctions bring nothing! First of all: less killed Ukrainians is not nothing. Second of all: if it wasn't for sanctions, Russian tanks would be standing much deeper in Europe. Putin started his 'campaign' in Ukraine with a sense of impunity. Because of the sanctions and because of Ukraine's readiness to fight back, he has a sense of hesitation now. He must end up with a sense of inevitability. The aggressors of the world must know: they will be held accountable for their crimes," Ukrainian president stressed.