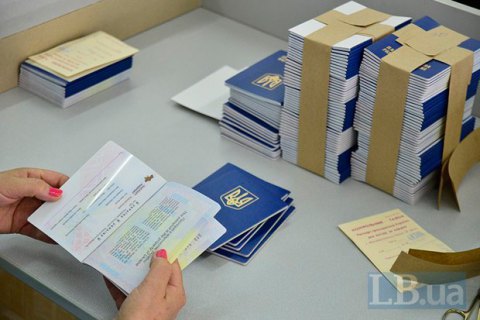 Prime Minister Volodymyr Groysman during a Cabinet meeting on Wednesday, 19 April, ordered the liquidation of queues for foreign passports.

"We need to carry out European integration not only through the Association, but also through changing the philosophy of public services. It is necessary to move faster in this direction," the head of government said.

The chairman of the State Migration Service Maxym Sokolyuk said during the Cabinet meeting on 19 April, 3,240,705 Ukrainians have received biometric passports that are mandatory for visa-free trips to Europe, and another 2 million such passports are planned to be issued until the end of the year.

"Every day, at least 10 thousand citizens of Ukraine, and on some days - 12 thousand, are being issued such documents. This is due to seasonal demand before the May holidays, summer holidays, etc. This results in queues in some offices," Sokolyuk said.

On April 6, the European Parliament voted to grant a visa-free travel for Ukrainians. The remaining formalities will take about two months. For travelling to the EU without visas, Ukrainians will need biometric passports.