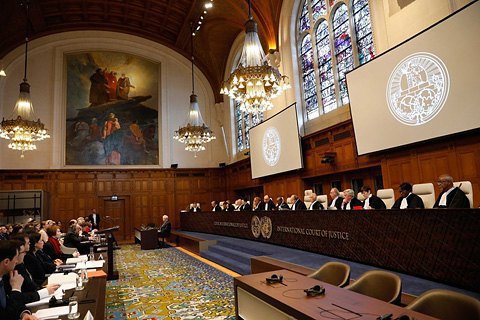 The United Nations International Court of Justice on Wednesday, 19 April, announced the order on interim measures in the proceedings between Ukraine vs Russia .

The court found that the evidence provided by Ukraine regarding the financing of terrorism by Russia were insufficient and refrained from the provisional measures on this part of the claim.

The court decided that Ukraine has not proved that Russia had violated Art. 2 of the International Convention on the Suppression of the Financing of Terrorism, namely, Russia's intent to finance of terrorists in the east of Ukraine.

"At this stage of the case, Ukraine did not provide evidence that would adequately demonstrate that these elements are plausible," said court chair Ronnie Abraham.

At the same time, the court decided to provide interim measures for another part of the lawsuit - the discrimination of ethnic Ukrainians and Crimean Tatars in the temporarily occupied Crimea.

In particular, ICJ ordered Russia to authorize the work of the Mejlis of the Crimean Tatar People and provide access to training in the Ukrainian language in Crimea.

Both Russia and Ukraine have an obligation to avoid violating the convention on racial discrimination, ICJ reminded. The court also demanded that everything necessary be done for a peaceful settlement of the conflict in Donbas.

Despite the fact that the court only partially granted the petition of Ukraine, it confirmed its prima facie jurisdiction in both parts of the claim.

Ukraine instituted proceedings against the Russian Federation on January 16, 2017, with regard to alleged violations of the International Convention for the Suppression of the Financing of Terrorism of December 9, 1999, and the International Convention on the Elimination of All Forms of Racial Discrimination of December 21, 1965. On the same day, Ukraine submitted a request for the indication of provisional measures, aimed at safeguarding the rights it claims under those two conventions pending the Court’s decision on the merits.