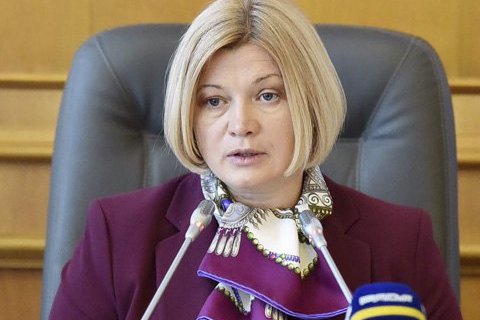 Donbas militants have again thwarted the agreement on the verification of the list of persons who refuse to return to the territories uncontrolled by Ukraine in the framework of the exchange of prisoners, says the representative of Ukraine in the humanitarian subgroup of the Trilateral Contact Group (TCG) in Minsk Iryna Herashchenko.

At a TAG meeting on 12 April, it was agreed that the SBU, Ombudswoman Valeriya Lutkivska, mothers of persons, Illegally detained in Donbas, and the OSCE would conduct the verification of the people who have declined to move back to the Donbas territories that are not controlled by Ukrainian government.

Previously, the representatives of separatists after two-months of talks opposed the participation of the Red Cross and the UN in the verification and exchange process.

"On Tuesday, April 18, OSCE monitors, the Security Service and the Office of the Ombudsman Lutkivska arrived in Mariupol, according to an agreement reached in Minsk in humanitarian subgroup and TCG. They we supposed to finally commence interviewing hundreds of imprisoned persons, who, according to Ukrainian legislation, can be released from custody and exchanged for our hostages in "" Herashchenko wrote on Facebook

"However, the verification procedure has failed to take place as "D/LPRs," under a host of pretexts, refused in the last minute and said that the issue - that we have discussed hundreds of times – still needs to be further discussed by TCG in Minsk."

D/LPRs warlords hold captive 126 Ukrainian citizens. In the meantime, almost two hundred people imprisoned in Ukraine, have stated the desire to stay on the territory controlled by the Ukrainian government instead of being returned to D/LPRs in the frameworks of prisoner exchange.

The negotiations on the verification procedure of their refusal have been deadlocked for months.