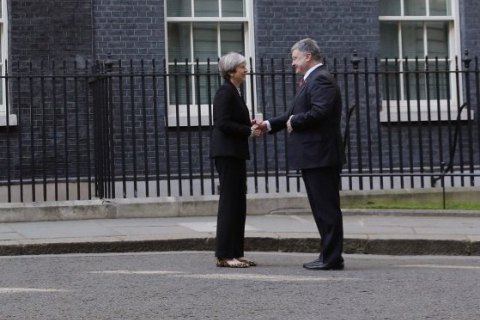 President Petro Poroshenko and the UK Prime Minister Theresa May discussed the expansion of cooperation in the sphere of security and Great Britain's assistance to Ukraine in developing and implementing legislation on the Financial Investigation Service. "The prime minister offered that the United Kingdom participate in a number of reform programs, including. I believe that the cooperation in the development and implementation of legislation on the service of financial investigations can be effective," Poroshenko said on 19 April as quoted by his press service.

The president reminded that he has ordered to finalize this issue in order to make the service that will replace the tax police as efficient and non-corrupt as possible.

Poroshenko said the discussion also touched upon the cooperation on the implementation of judicial reform, taking into account the proposals of British advisers and the experience and authority of the British judicial system.

"It's only a small part of what we have managed to agree on at the Downing Street. We indeed raised the issue of visa liberalization for Ukrainian citizens," the president said.

On 22 March, Ukrainian Cabinet approved a bill on the Financial Investigation Service.