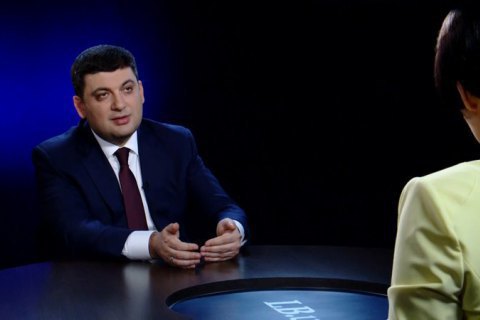 The Prime Minister of Ukraine Volodymyr Groysman has outlined the results of the year of the his government's work, including the hike of the minimum wage and the salaries of teachers and medics.

"The main thing we have managed to achieve was that we kept the situation under control. There were a lot of problems and fears: would there be enough money in the budget, would we secure the proper level of income, and if the government would collapse altogether that in the autumn," the prime minister said 19 April on the air of the talk show "Left Bank with Sonya Koshkina."

"However, we have survived, and not just survived, but stabilized the situation and even achieved some economic growth. We prevented the aggravation of the political crisis. We raised the minimum wage twofold, something that no one have done before us and I am sure nobody will. We raised teachers' salaries by 50% and by 30% % - the salaries of medics. We have accumulated cash for road repair," he went on.

Ot was a difficult year, the prime minister said.

"There was a huge responsibility, a lot of problems, and it's not easy when a person takes everything too close," Groysman said.

"Importantly, we have outlined the priorities for further reform, including pension reform, the deployment of cardiac centers across the country, and an increase in drug procurements. We secured an increase in the production of Ukrainian gas," the prime minister said.

The prime minister hopes that the parliament will vote the government's annual report in the near future.

"The report is in the Verkhovna Rada and is currently being considered by the committee. It can be put to the vote at any day now. I know that two motions have been registered in: one is take [the government's work] under advisement, the second is to consider it unsatisfactory," said Groysman.

He reminded that the Cabinet's annual report was mandatory and just coincided with the expiry of the annual term of his government.