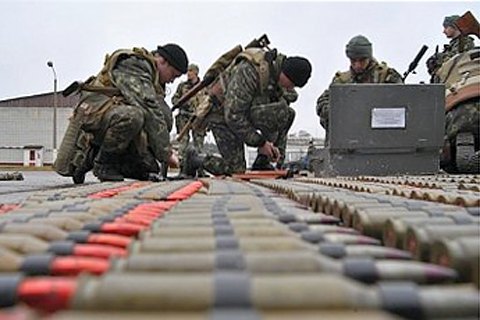 Two hundred million hryvnyas have been allocated from the reserve fund of Ukraine's state budget to restore the security of military warehouses and arsenals, Defence Minister Stepan Poltorak said on 5 May.

"About 99m hryvnyas are allocated to replenish what was lost due to a recent fire at a warehouse in Balakliya, of which 9m are for demining the territory. In addition, 200m hryvnyas have been allocated from the reserve fund to beef up the security of military warehouses and arsenals," Poltorak said in a statement posted on the Defense Ministry's website.

The minister said special attention will be paid to ammo warehouses located near the border with Russia.

According to Poltorak, the full replenishment of arsenals and warehouses will require 5bn hryvnyas, given the previous 25 years of underfunding."

On 23 March, a fire broke out on the territory of Ukraine's largest military depot in the city of Balakliya, Krarkiv Region. The fire caused the detonation of 125- and 152-mm tank and artillery shells. According to the military prosecutor's office, the cause of the fire was sabotage.

The depot accommodated 138,000 t of ammunition, of which 70 per cent was destroyed by fire, according to Poltorak.

The head of the Verkhovna Rada Committee on National Security and Defence, Serhiy Pashynskyy, has said that the Balakliya fire destroyed ammunition worth 1bn dollars.