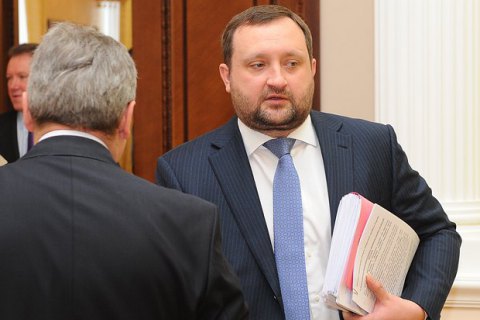 The Prosecutor-General's Office (PGO) has declared former acting Prime Minister Serhiy Arbuzov a suspect in the case on the embezzlement of 220m hryvnyas.

The PGO said that the former top official is suspected of involvement in the allocation of money from the state budget for the construction of a dedicated special purpose telecom network, which, according to the terms of sale of the government stake in Ukrtelecom, should have been assigned to the buyer, the company ESU.

Ukrainian prosecutors say that that deal has inflicted the loss of 220m hryvnyas on the state budget in 2012–2013.

The PGO will seek to put Arbuzov on an international wanted list and impose an absentia pre-trial restraint on him.

In early 2011, the State Property Fund sold Ukrtelecom for 10.575bn hryvnyas to ESU, the Ukrainian subsidiary of the Austrian EPIC, which in turn belonged to five individuals in Austria.

In 2013, Rinat Akhmetov's SCM bought the company which held the Ukrtelecom stock.