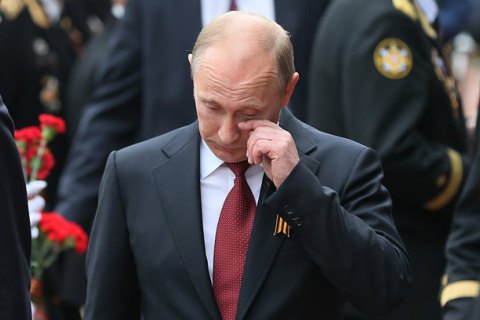 Russian President Vladimir Putin in his congratulatory note on the 72nd anniversary of the victory over Nazism in the Second World War ignored the leaders of Ukraine and Georgia.

"Vladimir Putin congratulated the leaders of Azerbaijan, Armenia, Belarus, Kazakhstan, Kyrgyzstan, Moldova, Tajikistan, Turkmenistan, Uzbekistan, Abkhazia and South Ossetia as well as the citizens of Georgia and Ukraine, on the 72nd anniversary of Victory in the Great Patriotic War," the Kremlin's website quoted Russian leader as saying.

In his congratulatory messages, the president of Russia stressed that Victory Day is a sacred date and a symbol of the unparalleled heroism of our fathers and grandfathers to save all of humanity from fascism.

Vladimir Putin underscored that "uniting efforts to fight any attempts to distort history and justify the criminal acts of fascism and Nazism would be the best way to pay tribute to the liberators."

Despite that Russia has recognized the results of the presidential elections in Ukraine in 2014, Putin does not mention President Petro Poroshenko in his congratulations.

Russia's relations with Georgia have deteriorated in August 2008, when Russian troops, together with South Ossetian formations, drove out Georgian troops from South Ossetia, which is officially part of Georgia.

Later, Russia recognized the independence of South Ossetia and Abkhazia.