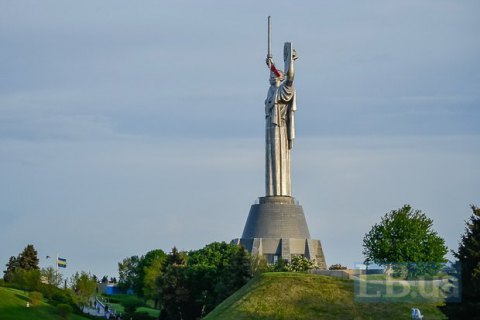 Ukraine will place an ATO memorial on the territory of the Museum of the National Museum of History of Ukraine in the Second World War.

"The feat of our heroes who defend the Ukrainian land from the Russian aggressor will always live in memories. I have signed a decree creating a memorial to Ukrainian heroes who gave their lives for the freedom, independence, sovereignty and territorial integrity of the Ukrainian state," the President of Ukraine Petro Poroshenko said wile opening a photo exhibition at the National Museum of the History of Ukraine in the Second World War on 8 May.

"I believe that a better historical location than these high hills on the right bank of the Dnieper cannot hardly be found. This place is traditionally visited by thousands of people, and this path will never grass over. All this territory, which inter alia will accommodate the National Museum of History of Ukraine in the Second World War and the future memorial complex for ATO participants, should form a single memorial of Ukrainian heroes. You may rest assured that the relevant political decision has already been taken," the Ukrainian president said.

Poroshenko believes such an approach will symbolize the continuity of generations of defenders of Ukraine.

Poroshenko lashed out with criticism at Russia, from Ukraine has to defend herself.

"Modern Russia as the legal successor to the USSR could not and did not have time to become a peace-loving nation. Let's recall the Moldovan Transdniestria, the Georgian Abkhazia and Ossetia, the Ukrainian Crimea and Donbas. Syria keeps them awake at night. Fancy that all of this has happened over the 25 years of existence of the Russian Federation. Mind that before that there were Afghanistan in the year 1979, and before that there was Czechoslovakia and Prague in the 1968, and before that there was Budapest and Hungary in 1956," Ukrainian president reminded of the most memorable acts of aggression by the Russian Federation and the USSR.

"Today, with their shoulder straps removed, and tanks' and APCs' hull numbers painted out, Russian military secretly cross the border to Ukraine without names, without documents, without the uniform to burn Ukrainian land and stain it with blood," Poroshenko said.