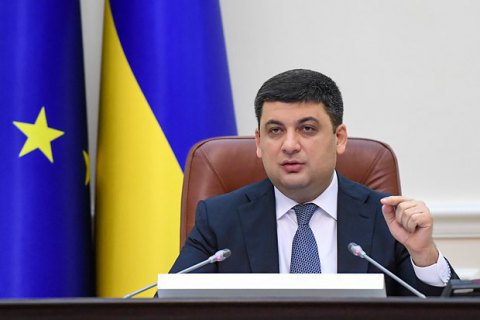 Ukrainian Prime Minister Volodymyr Groysman will pay a working visit to Israel on 14-16 May.

"Prime Minister of Ukraine Volodymyr Groysman will pay an official visit to the State of Israel on 14-16 May to discuss the application of Israel's advanced experience in agriculture and health care reform in Ukraine, as well as hi-tech cooperation," the Cabinet of Ministers said on its website on 10 May.

In addition, the Ukrainian prime minister will meet Minister of Agriculture Uri Ariel and visit the Volcani Research Centre of the Ministry of Agriculture and Rural Development.

A number of bilateral documents are planned to be signed during the visit: a memorandum on cooperation between the ministries of health, a memorandum on the exchange of statistical data between the customs administrations of Ukraine and Israel, a joint declaration between the Cabinet of Ministers of Ukraine and the Government of Israel on cooperation in the field of prevention of emergency situations and liquidation of their consequences; and an implementation protocol on the temporary employment of Ukrainian workers in selected industries of the Israeli labor market.

Groysman was supposed to visit Israel on 27–28 December last year, but the visit was cancelled after Ukraine supported the UN Security Council resolution demanding that Israel stop the construction of settlements in the Palestinian territories. Israel perceived it as an unfriendly gesture and refused to receive the Ukrainian prime minister.

In March, Groysman and Netanyahu talked on the phone and decided that the visit would take place in May. During the conversation, the parties also agreed to complete by the end of 2017 the negotiation process for the establishment of a free trade zone (FTA) between Ukraine and Israel.