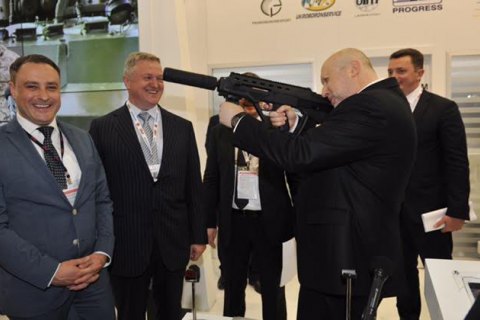 At the International Exhibition of Defence Industry IDEF 2017 in Istanbul, Ukraine has agreed a number of joint projects for the production of ammunition, the website of the National Security and Defence Council of Ukraine reported on 10 May.

In addition, memorandums on cooperation in the production of avionics, navigation and new aircraft have also been signed.

"The number of signed contracts and memorandums of cooperation indicates that Ukrainian weapons and technologies have a demand in world markets," said NSDC Secretary Oleksandr Turchynov.

According to Turchynov, Ukraine and Turkey have many promising joint projects in the military field and that a joint working group on coordination of strategic projects was working on their implementation. Turchynov said that Turkish partners are also ready to invest Ukrainian defense enterprises. "These are new large-scale projects, that we are discussing, and I hope that we will proceed from the theory to their implementation," said the Secretary of the National Security and Defense Council of Ukraine.

"We are already cooperating with MKEK and deepening our cooperation, today we have have found points of cooperation in manufacturing cartridges for small arms and many necessary components for cartridges," said Volodymyr Korobov, Ukroboronprom's deputy CEO.

MKEK was established in 1950. The main products of the corporation are intended for the Turkish Armed Forces: ammunition for small arms and heavy weapons, artillery systems, aircraft bombs, mines, explosives and missiles.

Also at the exhibition was signed a memorandum of cooperation between Antonov and Turkish Aerospace Industries (TAI) for the development and production of various modifications of unmanned aerial vehicles, including combat-purpose. "Unmanned aviation equipment is what the Ukrainian army needs. Ukroboronprom builds up competence in this sector and cooperates with world companies to provide the Ukrainian troops with the necessary," Korobov explained.

TAI is engaged in the design, development, production and integration, modernization and after-sales service of aerospace systems.

Another memorandum signed by Ukroboronprom was with the sub-secretariat on the defense industry of the Ministry of Defense of Turkey. The document is aimed at strengthening cooperation between the MIC of the two countries. This sub-secretariat is the chief administrator of Turkey's defense industry funds, responsible for providing the Turkish army with all types of weapons, military equipment and ammunition.

Ukraine, which conducts military operations in Donbas, intends to resume the production of ammunition. The Cabinet of Ministers in March 2017 approved the concept of creating ammunition production in Ukraine.

Ukroboronprom's deputy CEO Volodymyr Korobov earlier this year said that the concern is ready to deploy large-scale ammunition production in case of receiving financing for 18 months. This project will be able to manufacture cartridges of both NATO and post-Soviet calibers.

Earlier, Ukraine had the Luhansk Cartridge Factory, which produced ammunition for small arms. It is currently located on a territory that is temporarily uncontrolled by the Ukrainian authorities.