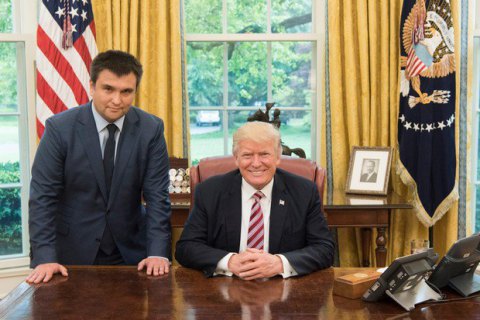 Minister of Foreign Affairs of Ukraine Pavlo Klimkin, who is on working visit to Washington, met US President Donald Trump and Vice President Mike Pence.

According to the Ukrainian embassy, Trump received Klimkin at the White House, where they discussed further support of Ukraine from the US.

Prior to that, the Ukrainian foreign minister and Mike Pence discussed the situation in Donbas.

The meetings were also attended by the ambassador of Ukraine to the United States, Valeriy Chalyy.

After meetings with the top leadership of the United States, Minister Klimkin reported on their results to President Petro Poroshenko.

Pavlo Klimkin traveled to Washington to attend a meeting of the basic group of the Munich Conference.

A few hours before the meeting with Klimkin, Trump met with Russia's Foreign Minister Sergey Lavrov.