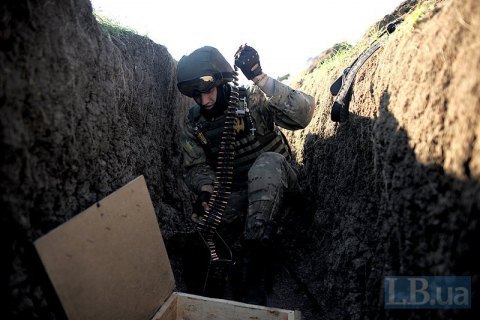 The situation in the area of the antiterrorist operation in Donbas shows signs of escalation in certain sections along the contact line, the press center of the ATO said in a release on Friday, 26 May.

During the day, militants 57 times fired the positions of Ukrainian units and residential areas, having wounded five ATO fighters. Some residential areas of populated areas fell under bombardment.

In the coastal sector, the ATO positions in the area of Krasnohorivka was shelled from mortars, tank and infantry fighting vehicle weapons, antiaircraft guns and infantry armament. During the shelling, several enemy missiles hit a residential block near the city hospital. Fortunately, no one was hurt but several nearby houses were damaged. The same settlement was fired at from 120-mm mortars and powerful 152-mm artillery. The consequences of the shelling are being looked into.

Ukrainian positions near Shyrokyne and Maryinka came under mortar fire in the evening. The defenders of Shyrokyne were fired at by a tank. Minor armed provocations were recorded in the area of Vodiane, Hnutove and Novotroyitske.

In the Donetsk sector, the ATO headquarters reported 26 enemy shelling attacks, notably in the suburbs of Avdiyivka. During the day, ATO fighters were pounded from enemy mortars and Grad, After dusk, the terrorists continued shelling using mortars, 122-mm artillery, grenade launchers and small arms.

In the area of the village of Luhansker, the enemy used 82-mm mortars and grenade launchers in the Svitlodarska bulge, and fired IFV weapons and small arms nearby Mayororske.

In the Luhansk sector, ATO HQ reported only two cases armed provocations during the day in the Nyzhnyotneplyy district, and in the area of Krymske, where the enemy fired grenade launchers at the positions of Ukrainian military at around 22:00.

According to the OSCE, 44 civilians have been killed and 181 were wounded in the ATO area since the beginning of the year.