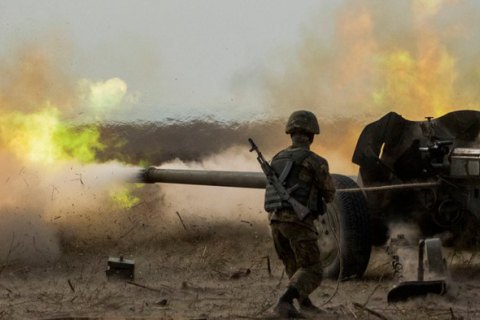 On Wednesday, the enemy 50 times opened fire on the ATO positions, repeatedly using heavy artillery, ATO headquarters reported on 25 May. More than half (27) of the ceasefire violations by militants were recorded in the coastal sector. On Wednesday evening, militants again fired artillery upon the ATO defensive fortifications. The enemy pounded ATO positions in the area of Shyrokyne, Chermalyk and Vodyane from 120-mm mortars. Militants used 122-mm artillery systems to shell the ATO positions in the area of Shyrokyne and Maryinka. In the same areas, as well as nearby Hnutove, Lebedynske, Pavlopil, Novotroyitske and Krasnohorivka, militants fired 82-mm mortars, grenade launchers, small arms, and on several occasions - IFV weapons.

In the Donetsk sector, the suburbs of Avdiyivka remained the hottest spot, where militants twice pounded the positions of Ukrainian military from the MRLS Grad. Enemy missiles once again hit the residential quarter in the southern outskirts of the city. Fortunately, none of the local residents suffered. The blasts destroyed roofs and windows in several private houses, though. The enemy repeatedly fired mortars, grenade launchers and small arms in the area of Novhorodske, Verkhnyotoretske and Pisky. The ATO positions in the area of Nevelske came under the fire of 122 mm artillery systems.

In the Luhansk sector, militants have not used heavy artillery weapons during the day. They fired 82-mm mortars on six occasions in the evening, however, against the defenders of Troyitske. After the sunset, the Novooleksandrivka area came under the fire of the enemy IFV, automatic grenade launchers and heavy machine guns.

One Ukrainian soldier was wounded in the ATO zone on Tuesday.