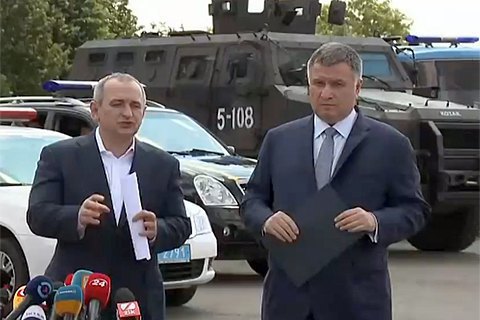 The National Police and the military prosecutor's office conduct a nation-wide operation detaining top officials of the former ministry of revenue and duties, Interior Minister Arsen Avakov and Chief Military Prosecutor Anatoliy Matios announced at joint briefing on Wednesday, 24 May.

The investigators bust former top tax officials during the presidency of Viktor Yanukovych, who are suspected of having being involved in a massive and systematic tax fraud, which investigation believes has inflicted nearly a hundred billion hryvnya damages to the state.

By 11:30 pm, 23 suspects were detained, including former chiefs of the ministry's offices in the Dnipro and Luhansk regions, the former head of the Crimean tax administration, and top-ranking tax chief in other regiosn.

All the detainees will be delivered by planes to Kyiv's Zhuliany airport where they will indicted, Matios said. From the airport they will be sent to the the capital's Pechersk District Court that has to decide on their arrest.

Avakov said that this is the largest anti-corruption operation in the history of Ukraine.

The Ministry of revenues and duties existed in Ukraine in 2012–2014, and was headed by Oleksandr Klymenko, who is on the national wanted list.