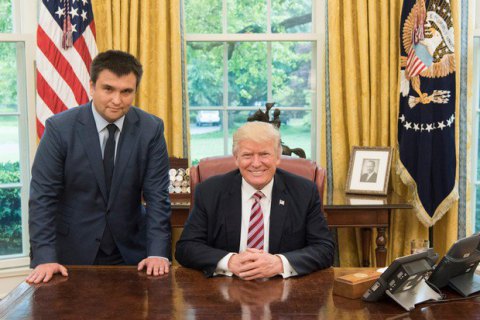 Photo: Photo: Embassy of Ukraine in the United States

In addition to the impending meeting with the US President Trump, Ukraine's Petro Poroshenko will meet with other world leaders in the coming months, Foreign Minister Pavlo Klimkin told journalists on Wednesday, 14 June in Kyiv.

"The President recently met with the German Chancellor, he will also meet with the President of France. There will be other meetings, in particular in Brussels. We are in for a period of very focused and concentrated political activity," said Klimkin.

As reported, the Ministry of Foreign Affairs of Ukraine confirms the planned meeting of the heads of state of Ukraine and the United States.

"The meeting will surely take place, we are preparing it, but we would like to hold the suspense. [Presidential spokesman] Svyatoslav Tsegolko will make a corresponding statement in the near future, simultaneously with our American friends. Ee are now working on the substantive part of the speech," the foreign policy chief Klimkin told reporters.