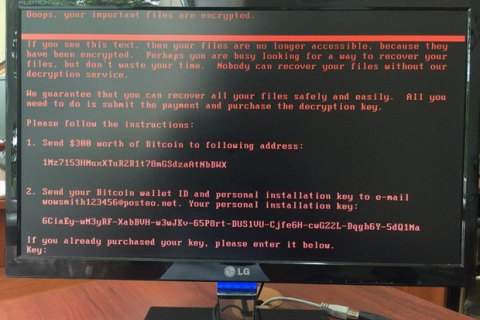 The National Bank warned banks and other financial sector players that on Tuesday several Ukrainian banks and financial institutions were subjected to an external hacking attack by an unknown virus.

"Under cyberattacks, these banks are experiencing difficulties with servicing clients and carrying out banking operations. The National Bank is confident that the protection of the banking infrastructure from fraud in cyberspace is properly organized, and the attempted cyberattacks on information systems of banks will be neutralized," the central bank said in a report.

The regulator is monitoring the situation and will report on the state of the cyberdefence of the national banking system.

Nova Poshta also reported about the hacker attack by the Petya.A virus. Its information systems and the call center are experiencing difficulties with operations.

"We are doing our best to resume operations in the near term. Thanks for understanding. We promise to inform on the situation," the company said on its Facebook page.

The Russian publication TJ, citing a source inside one of the attacked companies, said that the networks were infected with a new form of a cryptographic virus reminiscent of the recent WannaCry.

An employee said that his computer spontaneously rebooted, after which the system allegedly began to check the hard drive. After that, he saw that the same happens on all computers in the office: "I realized that there is an attack and I shut down my computer. When I turned it on, there was already a red inscription about bitcoin and money."