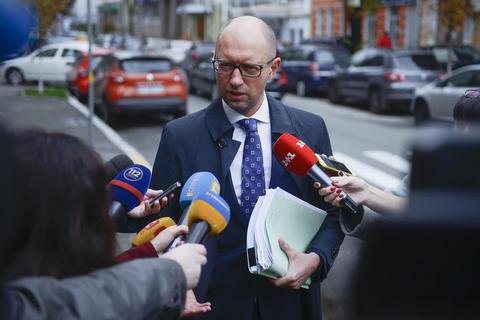 Former Prime Minister, leader of the Popular Front party Arseniy Yatsenyuk proposed to adopt a new Constitution of Ukraine. On Facebook Yatsenyuk writes that the current governance model has exhausted itself and Ukraine needs "a clear distribution of responsibility and a system of checks and balances."

"My vision in brief: president is the head of state, supreme commander-in-chief and national arbiter. Non-partisan. Parliament is the creator of laws and a controller on behalf of the people. MPs vote exclusively in person. Bills pass by majority of those present in the house, with a quorum of at least 150 deputies," former prime minister wrote.

The government, Yatsenyuk believes, should have full executive power.

President, according to Yatsenyuk, should have the right to a motivated dissolution of parliament in the manner set forth in the Constitution. The parliament can impeach the head of state.

The new Basic Law, according to Yatsenyuk, should set the course for accession to the EU and NATO.

LB.ua editor-in-chief Sonya Koshkina earlier wrote that the Presidential Administration is considering a constitutional reform that would render more powers to the parliament with a simultaneous reduction in the number of deputies. Such a reform, as planned, should guaranty Poroshenko's victory in the 2019 presidential race.