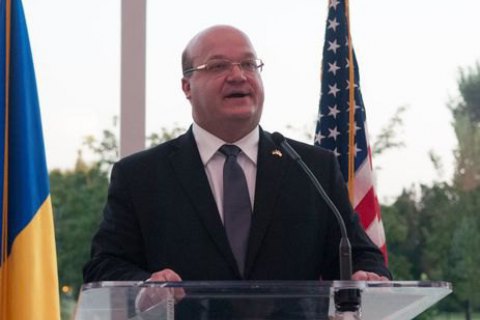 Ambassador of Ukraine to the US Valeriy Chalyy

The nominee for the post of head of the Federal Bureau of Investigation, Christopher Ray, promised to investigate whether Ukraine has interfered in the 2016 presidential elections in the US. In turn, the White House spokeswoman alleged a collusion between the US Democratic Party and the government of Ukraine during the US presidential campaign last year.

As reported by the Voice of America, during the Senate hearings on Wednesday on the approval of his candidacy, Christopher Ray had to answer questions of Republican senator Lindsay Graham. The Republican asked the applicant to assess the statements about Ukraine's interference in the course of the 2016 election campaign in the United States. Such reproaches in early 2017 appeared on the pages of the publication Politico in the article Ukrainian efforts to sabotage Trump backfire by Kenneth Vogel.

"The Politico investigation revealed that an American of Ukrainian origin, who advised the National Committee of the Democratic Party, has met with a high-ranking official of the Ukrainian Embassy in Washington to expose the connections of Trump's top campaign aide Paul Manafort with Russia, according to reports of people who are directly familiar with the situation. Are you aware of these accusations?" Graham asked Ray.

In response, the potential FBI chief that he did not know about the charges, but confirmed the senator's thesis that "it would be wrong for Ukraine to interfere in our elections" and stressed the need to probe into "Ukraine's interference in US elections."

Later on Wednesday, the White House spokeswoman, responding to accusations of Russian interference in US elections on the Trump side, said that the collusion of the Democratic Party with the Ukrainian government, in her opinion, has more than enough evidence. The White House also referred to Vogel's investigative article.

"If there is any evidence of collusion during the last presidential election in the US, it is the evidence of a collusion between the Democratic Party and the government of Ukraine," Sarah Sanders said.

In an article 'Ukrainian efforts to sabotage Trump backfire" published in January 2017, Kenneth Vogel said, referring to a former employee of the Ukrainian Embassy in the United States, Andriy Telizhenko, that the embassy allegedly worked closely with Oleksandra Chalupa, an American of Ukrainian origin, closely connected with the Democratic Party of the United States, helping her collect compromise materials regarding a member of the election staff of Trump Paul Manafort.

The article states that the embassy promoted Chalupa, who became an important source of information for the US and Democratic Party media about Manafort. The later, on a wave of media reports about his relationship with Russia, had to quit the job at Trump's campaign headquarters.

Vogel's article in recent days sparked intensive discussions around the alleged equivalence of the communication between the DNC with the Ukrainian Embassy in the US and last year's contacts of Donald Trump Jr. with persons who promised to hand over compromising evidence on Hillary Clinton from the Russian government over to the Trump's race team.

The US Embassy in Ukraine, in response to a request from the Voice of America, rejected accusations of cooperation with the Democratic Party.

"The Ukrainian Embassy in the United States, as stated earlier, in no way coordinated with the National Committee of the Democratic Party any efforts to conduct research or any actions aimed against candidates in the US presidential election campaign or members of their teams," the Ukrainian embassy said.

The Diplomatic Service of Ukraine also presented its positions regarding contacts with Oleksandra Chalupa.

"Ms. Oleksandra Chalupa, who is mentioned in the article, came to a meeting with the Ukrainian community in the Ukrainian embassy in order to initiate and conduct a number of promotional and cultural events on Ukraine.In the course of further communication, none of the embassy staff made any steps along the line Mentioned opposition research," the embassy said.

They also noted that the article by Vogel "as a whole contains a whole series of incorrect information, which the embassy said in a letter from Ambassador Valeriy Chalyy, published by Politico."

"Any provisions in your article that the Presidential Administration of Ukraine or the Ukrainian Embassy worked to counter Mr. Trump during the 2016 elections are incorrect. [...] Individuals from Ukraine could stand on the side of various parties to elections in the US, but the government of Ukraine did not commit such actions," he said.

Meanwhile, according to CNN, former and current members of the DNC staff deny that they have cooperated with the government of Ukraine to obtain compromising evidence on Trump or his assistants.

At the same time, sources in the camp of the democrats told CNN that Chalupa, who worked for the NDC on contract, informed the committee staff that Ukrainian officials were ready to provide sensitive information about Trump's headquarters, in particular regarding Paul Manafort.

"A source, informed of the situation, said that Chalupa 'on an informal basis informed at least one member of the committee last year that Ukrainian officials were concerned about the Trump campaign and its relations with Russia and offered cooperation between the NDC and the Ukrainian Embassy in the US," CNN said.

The Democratic Party denies ever received information from Chalupa and had no contacts with representatives of foreign governments.