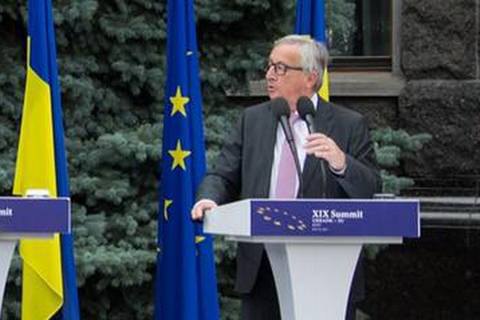 "We are all set to agree with the creation of a special anti-corruption chamber in court. We no longer insist on the creation of a separate anti-corruption court, but on setting up a chamber within a court that will deal with the fight against corruption, because the main thing is not instruments but the conviction that there is a desire in the Ukrainian society to fight corruption," UNIAN quoted European Commission President Jean-Claude Juncker as saying at a 13 July press conference following the results of the plenary session of the Ukraine-EU summit in Kyiv.

EC President stressed that the fight against corruption is one of the biggest problems of Ukraine.

"We suggested the president today some mediatory, temporary steps to cope with this problem. The European Union had demanded that Ukraine create a special court to deal with corruption-related cases. In the morning, we have agreed that if Ukraine creates a special chamber that will be dedicated to these problems within its judicial system, this will be enough," Juncker said.

Currently, the cases investigated by the National Anti-Corruption Bureau are being considered by Kyiv's Solomyansky District Court (as the NABU head office is located in this district).

The bureau has repeatedly expressed dissatisfaction with the decisions of this court and demanded the creation of a Supreme Anti-Corruption Court which would review all the NABU-investigated cases, and whose decisions could be appeal against only in the Supreme Court.

To create an anti-corruption court repeatedly demanded the US and the EU. Against this The Supreme Council of Justice and the Prosecutor General's Office.

Attorney General Yuriy Lutsenko proposed not to create an anti-corruption court, but to form a separate anti-corruption chamber within the existing system. This, he said, will speed up the process.