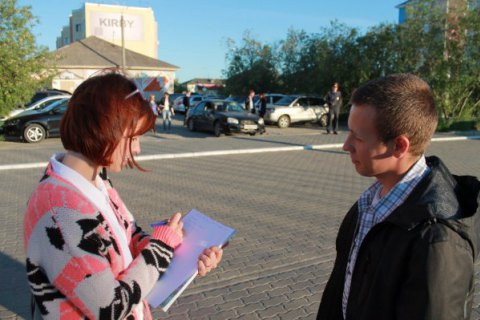 In July, the Democratic Initiatives Fund with the financial support of the UK Embassy in Ukraine conducted a sociological research on the Ukraine-controlled part of Donbas that showed that local residents are more inclined to compromise for the sake of peace and are ready to vote for the Opposition Bloc.

38% of respondents in Luhansk Region and almost 44% in Donetsk Region said that Ukraine should agree to any compromises for the sake of ending the armed conflict. About the same number of respondents are inclined to think that other forms of compromise are acceptable. The respondents en mass reject the idea of resolution of the conflict by force.

In the opinion of local residents, the best way to restore peace in Donbas will be "building normal life in the territories that are controlled by the government". Many respondents also support the strengthening of international sanctions. Remarkably, the sentiments in the two neighboring regions significantly vary greatly on this issue.

Most Donbas residents do not support the introduction of a visa regime with Russia (72.1% in Luhansk Region and 54.9% in Donetsk Region).

There is also a significant proportion of those who support the non-aligned status and the policy of non-alignment either to the European Union or the Customs Union headed by Russia.

A significant number of potential voters are undecided on their political sympathies.

In Luhansk Region, 24% of respondents said they were not ready to participate in elections, and another 43.5% did not choose any of the parties. In general, the most popular in the region is the Opposition Bloc (12.8% among those who are ready to take part in the elections). The rest of the parties are below the threshold of passing to the parliament.

In Donetsk Region, 34% of respondents said they were not ready to participate in elections, and another 18% did not choose any of the parties, with Oppobloc holding the lead with 12.2% support. Fatherland (7%) and For Life! (7%) would also stand the chance of passing the threshold.