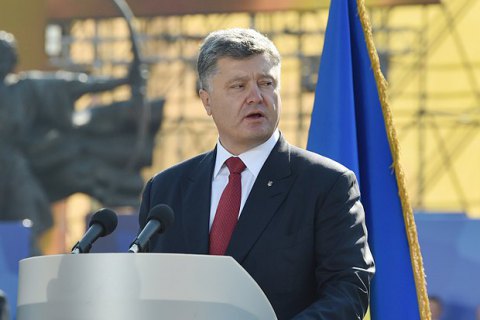 President Petro Poroshenko has advised opposition forces against aiding and abetting the aggressor while fighting for power.

He made a statement to this effect during the solemn flag ceremony in Kyiv's Sofiyska Square.

"The fight for unity, solidarity and consolidation of various political forces in the name of national interests is one of my key tasks as I see them. Unfortunately, either for reasons of egoism or political colourblindness, not all politicians can see that amid the external aggression, there are red lines in infighting which must not be crossed under any conditions. Because behind them the intrinsic democratic competition between the opposition and the authorities turns into, albeit unintentional, collusion with the aggressor, a gift to the general staff of the enemy state," he said.

After the New York Times suggested Ukraine's role in the success of North Korea's rocket programme, Yuliya Tymoshenko's Fatherland rushed to blame the authorities. The party later reneged on its statement, saying it was unauthorized.