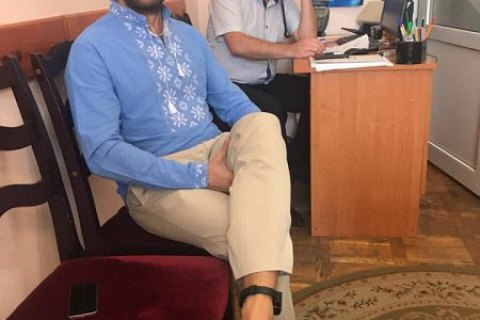 An ankle monitor has been put on MP Maksym Polyakov suspected of corruption.

"A month and a half has passed since the National Anticorruption Bureau of Ukraine's (NABU) first attempt to put an e-monitor on me. After all the trial and errors, at the first attempt, having heed all suggestions by my lawyers who taught on every occasion the employees of the anticorruption body how to act lawfully and made them honour the procedures, I as a good citizen put on an electronic monitoring device," he said on Facebook.

Polyakov, who is suspected of extorting a bribe in exchange for lobbying the bill on amber mining in the interest of an UAE-based company, repeatedly refused to put on the ankle monitor, as was ordered by Kyiv's Solomyanskyy district court. He was to deposit a bail of 304,000 hryvnyas [about 12,000 dollars] and hand in all his foreign travel passports.